The time is ripe for the world to begin healing and Sylvia Tosun wields lyrics as her weapon-of-peace. 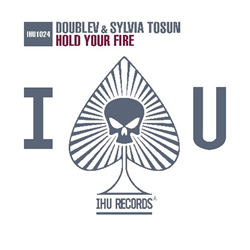 ‎Lyrics are ‎the tools with which Tosun combats hate. She wields the forces of positive energy to mend, and in doing so, she is herself transformed.

The lyric video for DoubleV featuring S‎ylvia Tosun, "Hold Your Fire" (IHU/Armada Music) is out now.

At a time in the world -- and especially in America -- when political rhetoric has again boiled over, exceeding the boundaries of civilized discourse and ‎common sense, songs like "Hold Your Fire" are more relevant than ever. “Hold Your Fire” is a song with dualities in meaning. The title can be viewed as a metaphor for harnessing one’s inner-strength, like a fire that burns within each living being. Tosun sings, “If you love me / Hold your fire.” Alternately, the lyrics may be taken in a more literal sense when considering the very real societal ill of gun-violence in America, a problem that threatens to overtake the national dialogue. Words matter and Tosun’s lyrics beg people to think before they speak.

‎Words become weapons-of-peace in Tosun’s elegant hands. ‎Lyrics are ‎the tools with which Tosun combats hate. She wields the forces of positive energy to mend, and in doing so, she is herself transformed.
‎
Sylvia Tosun is a classically-trained soprano and award-winning singer/songwriter with an affinity for electronic dance music. Accepted into New York’s prestigious Juilliard School of Music at age 15, Tosun began her career performing with the New York Grand Opera Company and shortly afterward became one of the lead vocalists of the multi-platinum selling act, Trans-Siberian Orchestra. Tosun has performed alongside Alicia Keys and Cyndi Lauper at the Great Wall of China. Tosun’s songs, “Underlying Feeling” and “Push and Pull” are classics to this day, the latter peaking at the #1 chart position in Billboard in 2010. In 2011, Tosun became one of the most recognizable voices in electronic dance music with “An Angel’s Love,” which was featured on Armin van Buuren’s Universal Religion Chapter 5 compilation. An ode to Tosun’s grandmother, “An Angel’s Love” quickly grew into a worldwide hit and is considered one of the defining vocal trance anthems of the decade. Tosun has collaborated with trance DJ/producer Andrew Rayel, most notably on a remix for “An Angel’s Love,” and on the co-productions, “There Are No Words,” “We Bring The Love” and “Winterburn.” Tosun was accorded the Songwriters Hall of Fame BMI Award for Excellence in Songwriting and the USA Songwriting Award in five categories. She is an unprecedented two-time recipient of the USO’s Ambassador to Goodwill.