She hopes her personal journey of coming to terms with her daughter’s homosexuality and her discovery of the origins of gender identity and homosexuality helps other parents with LGBTQ children cope with conflicting emotions and issues of faith. 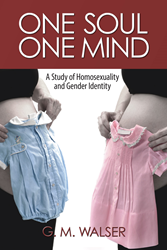 What inspired me to write One Soul/One Mind was my desire to stop the bullying and discrimination that many LGBTQ children and adults suffer.

Friday, April 15, is National Day of Silence as observed by the Gay, Lesbian and Straight Education Network (GLSEN). Since 1996, the goal of the annual National Day of Silence has been to illustrate the silencing effect of bullying and harassment on LGBT students. According to the GLSEN 2013 National School Climate Survey, nearly nine out of 10 LGBT students report verbal, sexual or physical harassment at school, and more than 30 percent report missing at least one day of school in the past month out of fear for their personal safety.

“These facts motivate me to take my own vow of silence,” says G.M. Walser, author of One Soul/One Mind: A Study of Homosexuality and Gender Identity (Brown Books Publishing Group). “Children, regardless of their sexual orientation or gender identity, are worthy of educational institutions where they feel protected. They should be able to safely learn how to reach their goals and make their dreams come true—just like everybody else.”

Walser hopes that by expanding the scope of the Day of Silence beyond schools, she can do her part to also ensure that LGBTQ students return to homes of love and acceptance after school. Her debut book One Soul/One Mind is a lesson from the heart about homosexuality and gender identity told through some of her own experiences and her honest, unfiltered progression of emotions regarding her own daughter’s gender identity differences.

“What inspired me to write One Soul/One Mind was my desire to stop the bullying and discrimination that many LGBTQ children and adults suffer. Many young people with gender identity differences are very often abandoned and rejected by their own parents and families,” she says.

Walser had a Catholic upbringing and later accepted southern Baptist theology. The teachings of the church and the Bible made it difficult to come to terms with her daughter’s homosexuality. She admits that acceptance was a long process. However, her understanding of the roots of gender identity and homosexuality, aided by scientific research and spiritual inspirations, helped her to accept what she couldn’t change about her daughter.

The path to acceptance led her to realize that the only thing upsetting about homosexuality was coming from other people. “Ignorant people, misinformed people,” says Walser. “And, if I were to be completely honest with myself, I had to acknowledge that I used to be one of them.”

She hopes that sharing her story will help other parents understand and deal with conflicting emotions regarding their own child’s homosexuality or gender identity differences.

“I’m grateful that I did not suppress or encourage it despite the fact that it made me uncomfortable at times,” says Walser. “I now realize that my daughter is the source of all the insights that have changed my life for the better: all the peace and happiness that have come to me in truly knowing who she is, how she feels about herself, and how much she has loved me. And she thanks me now for the way I have always shown my love.”

For more information about the GLSEN Day of Silence, visit: http://www.DayofSilence.org

For more information about G.M. Walser and her book One Soul/One Mind, visit: http://www.OneSoulOneMind.com

About Brown Books Publishing Group (BBPG)
Founded by Milli Brown in 1994, Brown Books Publishing Group is a full-service, independent publisher of high-quality books across all genres. Committed to producing award-winning books for authors who choose to retain the rights to their intellectual property, Brown Books publishes more than one hundred titles a year and has won numerous prestigious awards, including the Writer's Digest Grand Prize, Mom's Choice Award, Foreword Book of the Year, Gold Ink Award, Axiom Business Book Award and many more. Brown Books authors have appeared on programs and networks such as the “Today” show, Fox News, “Face the Nation,” CNN and BBC News. They have been featured in publications such as USA Today, Publishers Weekly, and The New York Times. In addition, BBPG authors have been guests on NPR programming, including “The Diane Rehm Show,” “Morning Edition” and “The Takeaway.” To learn more, visit http://www.BrownBooks.com and http://www.BrownBooksKids.com and http://www.BrownChristianPress.com.