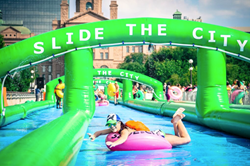 We anticipate up to 100 Slide the City events in the US and Canada and an additional 22 in other locations around the world.

It seems like spring is finally here to stay, but Slide the City, wholly owned by Sack Lunch Productions (OTC:SAKL), is already looking forward to summer. Optimal slide weather is just around the corner and online-registration for events all over the country is already open. As 2016 is only Slide the City’s second national tour, event organizers are thrilled by the massive public response.

The first thousand-foot slide of 2016 will hit Tampa on May 14. The portable summer paradise will then travel across the country until the end of September. 16,000 water slide enthusiasts have already registered to experience the event in locations from coast to coast. Event organizers anticipate almost 350,000 participants throughout the season.

Slide the City organizers have made various improvements to the event since last summer. Wave times have been implemented and capacities adjusted. They have also incorporated a block party feel into the already memorable event.

“We are excited about the wave and capacity improvements instituted for the 2016 season,” said Slide the City Event Director Chris Conran. “These improvements will ensure that every participant will get their allotted slides while decreasing their wait time in between each slide. Before and after their wave time, sliders can enjoy the rest of the festivities including food trucks, vendors, music and street performances.”

All those over 5 years of age and 46 inches tall are welcome to slide! Visit http://www.slidethecity.com for more information about dates and locations or see what fans have to say on the Slide the City Facebook page https://www.facebook.com/slidethecity

About Slide the City
The first event of its kind, Slide the City has seen massive growth since its beginnings in 2014. The 2015 summer tour stopped in over seventy cities around the world, and this year Slide the City is on track to produce more than 100 events. The family-friendly company brings its massive slides to locations from coast-to-coast. With music, local vendors, activities and more, city streets are transformed into the biggest block party of the summer.