Sujata Tibrewala, Current Artist in Residence at LFA, Chicago, through Her New Exhibition Talks About the State of World Politics Today

Artist Sujata Tibrewala, takes a critical look at world politics today and diverts our attention to the powerful messages left by influencers of the past. Through her works currently on display at her studio in Cupertino, California, she reminds the contemporary leaders that the real renaissance is attained not by noise but by positivity. 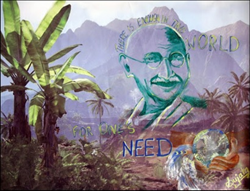 Enough for need, but not enough for greed

As all of America, is in the process of selecting a new president for them, the anticipation in the atmosphere is overwhelming. The hope and faith with which masses elect their candidate confirms that the world leaders have the power to shape the dreams of an entire generation. Artist Sujata Tibrewala, feels that off late the power of politics has lost its meaning and we have got stuck in a time where we need to reevaluate what we are preaching. Her works currently on display at her Cupertino studio commemorate the world leaders of the past who spoke a universal language of harmony. The artist says, “While we may be looking at America currently but the past decades world over have given rise to a form of politics where promises are vacuous and slogans have been reduced to rhetoric.” The artist wants that we must not to get involved in the mud-slinging match electioneering is becoming and instead look ahead together towards a promising future.

She thinks that the time is just right for us to step back from the excitement and reflect on the preaching of the leaders and influencers of the past. The artist goes back centuries to bring back messages left by luminaries. In a beautiful synchronism, these messages that were for another generation in another time, stand true to bring peace and prosperity even today.

A digital print and acrylic on canvas work titled – ‘Not enough for Greed’, by Tibrewala, depicts Mahatma Gandhi (known as the father of the nation in India, the eminent leader who lived from 1868 to 1948, gained prominence with his peaceful yet powerful movements during the independence struggle against the British in India).

The artist reminds the message left by Gandhiji, in her work that says – “The world has enough for everyone’s need but not enough for greed.” Tibrewala explains, “Mahatma Gandhi was a role model in frugal living and practiced self-restraint in all spheres of life. He advocated self-dependent local units instead of big industries that flourish at the cost of smaller ones.” Today when environmentalists campaign to think local and stress on recycling, one can’t help but go back to the wisdom left by this messenger of peace.

Another work entitled ‘The Leader’ is a mini painting depicting Rabindra Nath Tagore (1861 -1941), the Nobel laureate from India, who was instrumental in bringing modernism in Indian art, literature and music during the 19th and 20th century. The artist exhorts that his message – “If no body heeds your summon, proceed alone,” is what the leaders world over should practice instead of forcing the masses with their one-dimensional ideas. Tibrewala also remembers Maharani Gayatri Devi in her work. The princess, who lived from 1919 to 2009, was a successful politician and a fashion icon. She propagated women’s rights and advocated women’s education by opening an all girl’s school, when in India girls stepping out of the house was a rarity. The artist feels today when she sees women leaders talk about equal pay for genders, she realizes that we reached this stage because somewhere along the way we left behind the wisdom of the past.

Sujata Tibrewala, a self-taught artist come engineer remarkably embodies the indomitable spirit of human existence through her works. Her works, center around the theme of eco-feminism. She has exhibited her artworks in some of the most reputed venues around the globe such as University of Illinois, Chicago, Raw San Jose, Parallax Art Fair London, the Regional Commission of Arts St Louis, Life Force Arts Chicago, Mindworks Gallery Chesterfield, St. Louis Artists' Guild, Chesterfield Arts, Art World Association, Women's Caucus for the Arts, MySLART and Lalit Kala Academy, Delhi. She moved to the USA in 2010 from India and practices her art form at the Bay Area, CA, where she resides presently.