Recent release “Penny Doctors” from Page Publishing author Daniel Costello is a chilling story of underprivileged and vulnerable adults and children made to endure medical experimentation only to be returned to their families with a bag of coins. 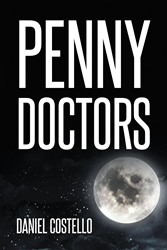 Daniel Costello, a retired NYPD police officer, has completed his new book “Penny Doctors”: a gripping and intriguing story detailing the atrocities committed to unsuspecting masses in the 1920’s and 30’s.

Mr. Costello shares that this phenomena had been brought to his attention by his late mother-in-law. “My story about The Penny Doctors was told to my wife by her mother many years ago. Her mother grew up in Northern Wisconsin in the 1920s.”

Published by New York City-based Page Publishing, Daniel Costello’s tale explains that, through the years, a majority of experimental medical research has been done on unsuspecting people, children and adults alike. However, children with disabilities were most vulnerable. Many of these practices were done in a hush-hush manner. One can only imagine the fear of knowing about these actions and having to be out after sunset.

Many of these children and adults were returned home with a bag of coins and often times in a more debilitated condition than when originally taken. No amount of money could ever compensate the families who cared for these unfortunate ones. Despite the inhumanity, generations to come have benefited by the accomplishments done by the medical profession. These professionals work relentlessly for answers to give humanity a better quality of life, and for the greater good.

Readers who wish to experience this mesmerizing work can purchase “Penny Doctors” at bookstores everywhere, or online at the Apple iTunes store, Amazon, Google Play or Barnes and Noble.