On April 27, 2016, HydroWorx will host “The Impact of Aquatics on Distance Running”, an hour-long webinar that tackles the way water is being used to safely increase the abilities of world-class runners and other athletes. 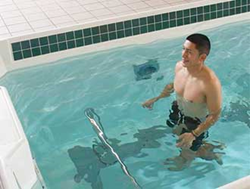 The use of aquatics in the elite distance running field has been well-documented in the past few years, especially with the success of Oregon Project runners like Olympians Mo Farah and Galen Rupp.

It’s no secret that every distance runner tries to edge out the competition while also achieving his or her personal best. However, the path to accomplishing these goals is fraught with risks, including those associated with over training such as repetitive stress injuries, strains, sprains and fractures. This is one of the main reasons that coaches and athletic trainers of distance runners have begun to look to aquatics to help their athletes build endurance, increase lean muscle mass and improve VO2 max as safely and efficiently as possible.

The use of aquatics in the elite distance running field has been well-documented in the past few years, especially with the success of Oregon Project runners like Olympians Mo Farah and Galen Rupp under the guidance of world-class runner-turned-coach Alberto Salazar. Pete Julian, the Assistant Coach for the Oregon Project’s Running Team, regularly advises his athletes to utilize their high-tech therapy and exercise pools equipped with underwater treadmills and resistance jets. By adding mileage in a low-impact, high-returns environment, the runners have the opportunity to take their abilities to the next level with less risk of season-ending injury.

Julian will be discussing his experiences during a HydroWorx-hosted webinar, “The Impact of Aquatics on Distance Running”, on Wednesday, April 27, 2016, from 1:00-2:00 E.D.T. He is well-versed in the subject of distance running and aquatics, having been an All-American runner during his college years at the University of Portland, a member of the 1997 and 1998 IAAF World Cross Country Championship teams, and bronze medalist at the 1999 Pan American Games. He has been with the Oregon Project as a coach since 2012.

Julian’s webinar will cover a number of topics associated with best practices involving aquatics and runners of all stages, ages and abilities. Subjects tackled during the hour-long event include:

“The Impact of Aquatics on Distance Running” will include a review of an illustrative case study, as well as photos and videos. Attendance to the webinar is free, but registration must be made online prior to the start of the program.

Since the late 1990s, HydroWorx has manufactured aquatic therapy products with built-in underwater treadmills to enable medical and performance professionals to more effectively offer their patients and athletes the opportunity to increase range of motion, decrease risk of falls and joint stress, remain motivated through the rehab process and speed the return to play for athletes and every day normal activities.

Products such as the HydroWorx 2000 and 500 Series therapy pools, along with the new construction-free HydroWorx 300 system have revolutionized the face of aquatic therapy; in fact, HydroWorx technology is used by world-class facilities like the renowned Kennedy Krieger Institute, Cleveland Clinic, Frazier Rehab Institute and The Andrews Institute, as well as many elite athletic programs including the University of Oregon, Kansas City Royals, Washington Redskins, The Ohio State University, Manchester United and Chelsea Football Clubs and hundreds more.

HydroWorx offers a wide range of underwater treadmill pools and peripheral products and services. Every day, more than 24,000 athletes and patients use HydroWorx technology to recover from injuries and health conditions.

More information about HydroWorx can be found at http://www.HydroWorx.com