ArcScan, Inc., the developer of next evolution medical imaging devices, announced today that it has received authorization to CE Mark its proprietary precision ultrasound ophthalmic device, the ArcScan Insight™ 100, for commercial sales across the 30 nation European Economic Area (EEA) and Switzerland 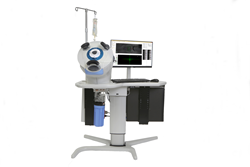 ArcScan, Inc., the developer of next evolution medical imaging devices, announced today that it has received authorization to CE Mark its proprietary precision ultrasound ophthalmic device, the ArcScan Insight™ 100, for commercial sales across the 30 nation European Economic Area (EEA) and Switzerland. The CE Mark approval follows closely upon FDA 510(k) clearance which has positioned the Company for commercial sales across the United States.

“This is a major milestone for ArcScan, it is the culmination of a number of years of hard work refining and evolving our proprietary designs to be able to produce a robust, reliable device capable of delivering best-in-class images and biometry of the cornea and anterior segment of the eye,” commented Andy Levien, CEO of ArcScan. “CE Mark opens up Europe and other territories around the world for commercial sales which represent in excess of 30% of our global target markets. Together with our recent FDA 510(k) clearance in the United States, CE Mark provides us with the means to start generating worldwide commercial sales immediately.”

The CE mark approval means that ArcScan will ship its first EEA unit to the London Vision Clinic http://www.londonvisionclinic.com , one of the leading and pre-eminent refractive surgery clinics in the world. Professor Dan Z. Reinstein, MD MA(Cantab) FRCSC DABO FRCOphth FEBO, founder and Medical Director of the London Vision Clinic is also the Chief Medical Officer of ArcScan and one of the original inventors of the ArcScan technology. The Insight 100 device will provide the opportunity to assess patients before and after surgery with an unprecedented level of accuracy, offering improved safety and precision for laser eye surgery as well as phakic IOL and cataract surgery. Having the Insight 100 located at the London Vision Clinic will also provide a platform for high profile demonstrations as ArcScan targets initial commercial sales across Europe.

According to Dr. Reinstein, “This is a big milestone for ArcScan. As one of the original inventors and developers of the core technology and it’s multitude of applications, one can only imagine how gratifying it is to know that this will now be available to everyone worldwide. I know from first-hand experience what a game-changer this technology represents, having used it from early experimental setups to the last Artemis VHF digital ultrasound scanning prototypes over the last 25 years. Until now, only a handful of surgeons have been able to offer their patients the safety and accuracy benefits of VHF digital ultrasound that so many have been waiting for having followed the application developments through the hundreds of international meeting presentations and more than 80 peer-reviewed scientific studies published using this VHF digital ultrasound technology. The new ArcScan Insight 100 device has benefited from a wealth of superb engineering input which has made scanning with the device extremely user-friendly, quick and efficient for a busy practice such as ours. There will be a very significant demand in Europe for this scientifically proven and published technology because of the immediate applications to screening patients for laser eye surgery and the diagnostic sizing improvements that it offers for intraocular lens surgery. The CE Mark will position ArcScan to satisfy this burgeoning demand. I am very excited to be the first to showcase the Insight 100 in Europe.”

About ArcScan: ArcScan is focused on developing and commercializing the next evolution of medical imaging devices. Its initial focus is on commercializing smart visualization technology and continually evolving ultrasound to provide ophthalmologists with new insights into the true anatomy of the anterior segment of the eye, including areas behind the iris. ArcScan’s mission is to thereby enable better medicine in ophthalmology by driving improved outcomes in refractive, corneal, cataract, and glaucoma surgery.

About CE Mark: A CE Mark verifies the ArcScan Insight™ 100 device has met all applicable directives of the European Commission (EC) and subsequently the laws and regulations of the European Union (EU) member states and, therefore, can be commercialized within the 30-nation EEA and Switzerland.