The growing list of performers scheduled for the 35th anniversary party at the Sturgis Buffalo Chip displays inclusive culture and wide-ranging diversity. 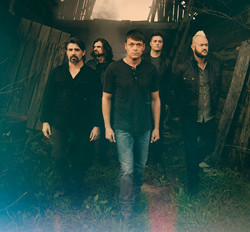 3 Doors Down will perform at the 35th anniversary celebration at the Sturgis Buffalo Chip on Saturday, Aug. 6

A short video that announces these bands and tells the story of The Chip’s inclusive culture and wide-ranging diversity can be found here: http://bit.ly/1kQuT71

The list of supremely talented acts scheduled to perform for the Sturgis Buffalo Chip’s 35th anniversary celebration is growing rapidly with the announcement of four bands as distinct as the bikes ridden through the venue’s front gates each year. A short video that announces these bands and tells the story of The Chip’s inclusive culture and wide-ranging diversity can be found here: http://bit.ly/1kQuT71.

Chart-busting alternative rock band 3 Doors Down will take over the Wolfman Jack Stage on Saturday, Aug. 6. The release of hits like “Kryptonite,” “Here Without You” and “When I’m Gone” sent this band on a meteoric rise to fame and helped them sell over 20 million albums worldwide. Fans at the Chip can expect to hear many of these hits as well as tracks from the band’s recently released album “Us and the Night.”

Legendary musician, and songwriter Leon Russell will belt out a surprising selection of eclectic hits on Sunday, Aug. 7 prior to a performance by Kid Rock. Russell’s stellar 50-year musical career has spanned generations and produced a catalog that’s leapt across genres. He has performed with superstars such as Ringo Starr, George Harrison, Eric Clapton, Bob Dylan, Joe Cocker, The Rolling Stones and many more. He is most well known as the creator of mega hits such as “Bluebird,” “This Masquerade,” and “A Song for You.”.His 1979 “Heartbreak Hotel” duet with Willie Nelson scored a no. 1 hit on Billboard’s country chart, and his 2010 collaboration with Elton John on “The Union” scored Russell his sixth gold album.

The hard-driving rockabilly of Reverend Horton Heat will strike a chord with Buffalo Chip guests on Wednesday, Aug. 10. “The Rev’s” throwback sound, frenzied showmanship and twisted sense of humor have earned them a devoted cult following who are sure to fill the Chip amphitheater to hear songs like “Psychobilly Freakout,” “Big Sky” and “400 Bucks.”

The eclectic list of celebrated musicians already scheduled for the 35th anniversary of “The Best Party Anywhere®” indicates that 2016’s Buffalo Chip concert lineup will truly offer something for everyone.

About The Sturgis Buffalo Chip
The Sturgis Buffalo Chip is the Largest Music Festival in Motorcycling™. Established in 1981, the venue’s nine-day festival, known as The Best Party Anywhere®, remains one of the world’s most televised and longest running independent music festivals. Buffalo Chip guests have the freedom to party and play while experiencing world-class concerts, outrageous events, moving freedom celebrations, thrilling PowerSports and more. Located three miles east of Sturgis, SD on 600 creek-fed acres, it offers cabins, RVs, camping, a swimming hole, bars, mouth-watering food, showers, paved roads, and more to visitors traveling from all corners of the world. The Chip's concerts are free with camping. More details are available at http://www.BuffaloChip.com.

Leon Russell will belt out a surprising selection of eclectic hits on Sunday, Aug. 7 prior to a performance by Kid Rock.Leon Russell