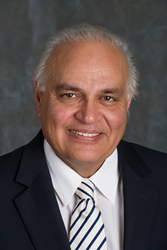 Renowned radar signal processing expert Moeness Amin, PhD, Director of Villanova University’s Center for Advanced Communications, and Professor of Electrical and Computer Engineering, has been awarded Germany’s prestigious Humboldt Prize, also known as the Alexander von Humboldt Research Award. Sponsored by the Alexander von Humboldt Foundation, this international honor recognizes the lifetime achievements of researchers whose fundamental discoveries, new theories and insights have had a significant impact on their discipline, and who are “expected to continue producing cutting-edge achievements in the future.”

Amin was nominated for the Humboldt Prize in recognition of his groundbreaking signal processing research projects that advance assisted living safety with radar, improve the quality of wireless services in communications, provide accurate and robust positioning in satellite navigations, enable search and discoveries of extraterrestrial intelligence in radio telescopes, streamline postal services and parcel tracking in Radio Frequency Identification (RFID), and that achieve effective structural health monitoring in ultrasound. Amin’s research is the first in his area of specialization to receive the Humboldt Prize.

The Humboldt Foundation grants up to 100 Humboldt Research Awards annually in all disciplines, with a prize valued at €60,000 (more than $67,000), and the possibility of further support during the prize winner's life. Recipients are invited to spend up to one year cooperating on a long-term research project with specialist colleagues at a German research institution. Amin will continue his collaboration with Darmstadt University of Technology’s (TU-DA) signal processing group, playing an important role in the development of a new research initiative on assisted living.

The Humboldt Prize will be presented to Amin at the annual Humboldt meeting in Berlin in July, a highlight of which will be a reception hosted by the President of the Federal Republic of Germany, Joachim Gauck.

“It is indeed gratifying to have been selected to receive such international recognition, which will enable me to pursue valuable collaborations with Darmstadt and accelerate the development of radar technology for indoor remote monitoring,” said Amin. He expressed appreciation of the award, adding, “It recognizes my contributions to the broad area of signal processing and crowns all of my past achievements.”

“The Humboldt Prize nomination underscores Dr. Amin’s many accomplishments,” says Zoubir. “Dr. Amin has significantly contributed to advances in signal analysis and processing for communications, radar, satellite navigation, radio frequency identification and ultrasound. The depth and breadth of his research contributions to signal processing are unique, as evidenced by the diversity of his prestigious awards and fellowships.”

The Humboldt Foundation is named in honor of Friedrich Wilhelm Heinrich Alexander von Humboldt (1769–1859), a German geographer, naturalist and explorer. Originally funded by von Humboldt’s friends and colleagues after his death, the foundation was reendowed by the German government after World War II to promote international academic cooperation with German scientists.

Amin’s numerous accolades include being a Fellow of four societies: the Institute of Electrical and Electronics Engineers (IEEE), the International Society of Optical Engineering (SPIE), the Institute of Engineering and Technology (IET), and the European Association for Signal Processing (EURASIP). Amin has received technical achievement awards from the IEEE Signal Processing Society in 2014, EURASIP in 2009, and the North Atlantic Treaty Organization (NATO) in 2010. In addition, Amin was awarded the IEEE Third Millennium Medal, the 2015 IEEE Aerospace and Electronic Systems Society Warren D. White Award for “Excellence in Radar Engineering,” and the 2010 Chief of Naval Research Challenge Award. Other honors include being the first faculty in Villanova’s College of Engineering to receive the University’s Outstanding Faculty Research Award in 1997, being named an IEEE Signal Processing Society distinguished lecturer in 2003-2004, and chairing the electrical cluster of the Franklin Institute Committee on Science and the Arts.