Universal Coin & Bullion announces the release of the American Eagle silver bullion coins packaged with special labels featuring the facsimile signature of NRA Executive Vice President Wayne LaPierre. These coins are being sold to raise funds for the NRA’s work to defend the Second Amendment. 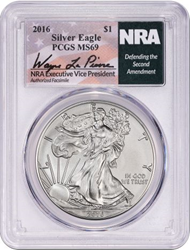 I’m proud to join with them and announce the release of their NRA Signature Series Silver Eagles.

“Mike Fuljenz and Universal Coin & Bullion have been strong NRA supporters for over ten years. I’m proud to join with them and announce the release of their NRA Signature Series Silver Eagles, and $2 will be provided to the NRA for every facsimile signature coin sold. Thank you for your support of the NRA and this important program,” stated LaPierre.

The price per coin, subject to change and while supplies, is $26.99 plus shipping. Orders can be placed by calling Universal Coin & Bullion at (800) 822-4653 or by ordering online at http://www.UniversalCoin.com.

Universal Coin & Bullion is the Official Bullion and Rare Coin Expert of NRA Publications. Universal’s President Michael Fuljenz is a Golden Ring of Freedom member, NRA Benefactor member and long-time supporter of the NRA's Eddie Eagle Gunsafe® program. Known as America's Gold Expert®, he has won more than 50 prestigious national and regional awards and honors for his consumer education and protection work about rare coins and gold and silver. Mike also has served with distinction as a consultant to the Federal Trade Commission, United States Mint and Royal Canadian Mint, and is on the Boards of Directors of the influential Industry Council For Tangible Assets, Numismatic Literary Guild and Crime Stoppers of Beaumont, Texas. He is a member of the prestigious Professional Numismatists Guild (PNG), and he is a PNG Accredited Precious Metals Dealer. For useful information about buying and selling rare coins and gold and silver, visit http://www.UniversalCoin.com.