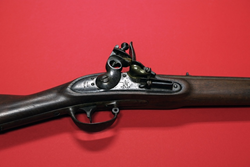 "The museum is pleased to share this artifact that few people have seen; a treasure used by troops during the Texas Revolution ,” says Larry Spasic, president.

As is frequently the case when a rare and unusual historic artifact gets attention in the media, the public goes searching in their own attics and collections for similar items. Recently, native Texan Tom O’Neal learned he owned a previously undocumented Tryon musket that has been in his family for several generations.

In the true spirit of a Texas patriot, O'Neal is loaning a prized Tryon flintlock muzzle-loaded musket from 1816 to the San Jacinto Museum of History Association, where it will be on display for free until the end of 2021. Even though 1,500 of these .69-caliber muskets were ordered from Tryon of Philadelphia, only 860 were shipped due to a cholera epidemic in the eastern U.S., and of those, only 321 were ever officially put to use. Research shows the Republic was also suffering financially and could not afford to purchase the remaining 640 muskets; it is unclear if the Republic later fulfilled the contract.

In 1841, Republic of Texas President Mirabeau B. Lamar proposed that an expedition of traders be sent to Santa Fe accompanied by a volunteer escort guard, who were issued these Tryon muskets.

Five companies of infantry and one of artillery accompanied the traders when they left Austin on June 19, 1841. When the expedition reached Santa Fe in September, they were met by armed resistance ordered by New Mexico’s Governor Manuel Armijo.

The Texians were imprisoned and the New Mexicans probably destroyed many of the muskets, as only a few exist today. The Santa Fe Expedition was the subject of a heated diplomatic controversy between the two nations before most of the prisoners were finally released in April 1842.

These 1816 Tryon muskets were made of milled steel finished in a grey patina and a stock made of American Black Walnut. Weighing 10 pounds, they worked with a flint mechanism that fired a charge of black powder and a .69 caliber lead ball. According to historians, they were similar to what David Crockett would have used in the Texas Revolution.

O’Neal—who now lives in Arlington, Texas, but was born and raised in Glen Rose, Texas,—credits his son Stephen with the idea to loan the gun to a museum. “The family believes the gun belonged to my great, great, great, grandfather Samuel Watkins. Samuel haled from Wales, UK, then fought in the Texas Revolution in the Republic of Texas army and received land grants for his service,” says O’Neal. “I remember the gun hanging on a large wooden beam in my grandfather John W. Noack's basement in Rainbow, Texas, until his passing in 1997.”

"The museum is pleased to share this artifact that few people have ever seen, so we encourage the public to view this treasure that was actually offered by the Republic to protect the troops during the Texas Revolution ,” says Larry Spasic, president, San Jacinto Museum of History Association. The firearm will be part of the museum’s permanent exhibit that is open to the public year-round. In 2011, the San Jacinto Museum exhibited one of what was then considered only five Tryon Model 1816 muskets made for the Republic of Texas in 1840 in a special exhibit.

The San Jacinto Museum of History Association was formed 77 years ago in 1938, one year before the San Jacinto Monument opened in 1939. The mission of the Museum remains to collect and preserve significant historical materials which relate to the early Texas history and its culture, and to promote the study of the Texas history through exhibits, publications and educational programs. That is a Texas-sized story to tell, so the Museum Association is in the throes of an expansion plan that will include a new annex and visitors center.

The San Jacinto Monument is one of the tallest stone column monuments in the world. The nearly 500-foot elevator ride to the Observation Deck reaches the top, visitors can stand beneath the 220-ton, 34-foot Lone Star of Texas—and see the historic battleground of The Battle of San Jacinto, the marshland restoration and boardwalk, the Buffalo Bayou, the busy Houston Ship Channel, the Battleship TEXAS, and many square miles of surrounding area.

For a minimal fee, visitors can purchase tickets for the elevator ride to the observation deck, the Texas Forever!! The Battle of San Jacinto digital presentation, San Jacinto Museum of History and its exhibits.

For more information about the San Jacinto Museum of History, its attractions and events, please call 281-479-2421, or visit http://www.sanjacinto-museum.org or the museum’s Facebook page.