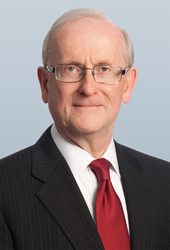 “Larry has achieved so much in his more than 40 years practicing law, that this award comes as no surprise to me or anyone else at the firm,” said Michael A. Chivell, Armstrong Teasdale managing partner.

Armstrong Teasdale, a law firm with offices across the United States and in China, is proud to announce that Laurence (Larry) Tucker, Kansas City managing attorney and member of the firm’s Executive Committee, will receive the Richard S. Arnold Award for Distinguished Service today during the Eighth Circuit Judicial Conference held in Rogers, Ark. Tucker is a partner in the firm’s Litigation practice group.

The award recognizes one attorney from each of the districts within the Eighth Circuit who have achieved professional excellence in their fields, are leaders in the legal community, have made significant contributions to pro bono cases and mentored young attorneys. Tucker was chosen from the Western District of Missouri.

The selections for this award were made by the chief judges of the district courts of the Eighth Circuit, in consultation with other judges in each of the districts.

“Larry has achieved so much in his more than 40 years practicing law, that this award comes as no surprise to me or anyone else at the firm,” said Michael A. Chivell, Armstrong Teasdale managing partner. “His guidance of the Kansas City office for nearly a decade is a testament of his dedication to his practice and our firm. His pro bono services for those in need have left a lasting benefit on the Kansas City community. We are very proud of Larry’s achievements and to have him on our team.”

Tucker serves as lead trial counsel in large, complex business matters. A powerful and experienced advocate, he has tried dozens of jury trials and argued multiple appeals in state and federal courts including the Missouri and Kansas Supreme Courts and U.S. Courts of Appeals for the Fifth, Eighth and Tenth Circuits. Tucker also acts as an arbitrator and mediator in commercial and business disputes. He has a reputation for his community service and acts as general counsel to an organ procurement organization serving western Missouri and all of the state of Kansas. Tucker represents other organ procurement organizations in administrative appeals arising out of Medicare cost report audits.

He has been listed in Chambers USA: America's Leading Lawyers in Business for Commercial Litigation since 2011, and is the recipient of the Missouri Bar Foundation’s W. Oliver Rasch Award for a 2010 article published in the Journal of The Missouri Bar. Tucker is listed as one of The Best Lawyers in America® for Commercial Litigation and Insurance Law (10+ consecutive years), and in 2011, was named Lawyer of the Year in Insurance Law. In addition, he has been listed among the Missouri/Kansas Super Lawyers® for Business Litigation since 2007. Tucker is AV® Peer Review Rated by Martindale-Hubbell and in 2013, was selected as a Top Rated Lawyer in Commercial Litigation by Martindale-Hubbell and American Lawyer Media (ALM).

Admitted to practice in Missouri, Tucker earned his B.A. from Central Methodist University and J.D. from Duke University School of Law.

About Armstrong Teasdale: With lawyers in offices across the United States and in China, Armstrong Teasdale LLP has a demonstrable track record of delivering sophisticated legal advice and exceptional service to a dynamic client base. Whether an issue is local or global, practice area specific or industry related, Armstrong Teasdale provides each client with an invaluable combination of legal resources and practical advice in nearly every area of law. The firm is a member of Lex Mundi, a global association of 160 independent law firms with locations in more than 100 countries, and the United States Law Firm Group, a network of 18 law firms headquartered in major U.S. cities. Armstrong Teasdale is listed in the Am Law 200, published by The American Lawyer, and the NLJ 250, published by The National Law Journal. For more information, please visit http://www.armstrongteasdale.law.