Awards were handed out at a ceremony at The Federal Bar in North Hollywood on Sunday, May 1, 2016 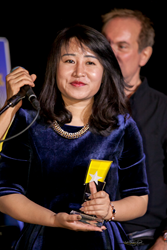 International Film Festival North Hollywood (IFFNoHo) today released the names of the winners of the 2016 film festival. The Awards Ceremony was held on Sunday, May 1, at The Federal Bar in North Hollywood and was sponsored by VEDC, a nonprofit micro and small business lender.

The festival hosted filmmakers from all over the world for the four day event, screening 66 films from 15 countries, April 28 through May 1, 2016 at the NoHo Arts Center.

ABOUT INTERNATIONAL FILM FESTIVAL NORTH HOLLYWOOD:
The International Film Festival North Hollywood is a 501(c)(3) non-profit organization that celebrates the art of filmmaking, helps support a community of artists and showcases North Hollywood as an entertainment and travel destination. IFFNoHo supports and nurtures emerging independent filmmakers and their stories from around the world not currently found in mainstream American cinema. Our goal is to collaborate with community partners to build social cohesiveness, philanthropy and volunteerism using film as the catalyst.