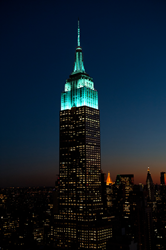 When the Empire State Building, an internationally recognized landmark, shines the signature color of this cause on Sunday, it will symbolize the nation’s growing recognition of the importance of food allergy awareness

The iconic Empire State Building will be lit in teal on May 8 in honor of Food Allergy Awareness Week, an initiative founded by Food Allergy Research & Education (FARE) nearly 20 years ago to raise awareness about the severity of food allergy and anaphylaxis.

The Empire State Building is proud to recognize Food Allergy Awareness Week, a time when efforts are heightened to educate others about food allergy, a potentially life-threatening and life-altering disease that affects 15 million Americans, including 1 in 13 children.

“This is a terrific way to kick off Food Allergy Awareness Week,” said James R. Baker, Jr., MD, CEO of FARE. “When the Empire State Building, an internationally recognized landmark, shines the signature color of this cause on Sunday, it will symbolize the nation’s growing recognition of the importance of food allergy awareness.”

Every three minutes, a food allergy reaction sends someone to the emergency room in the U.S. FARE is dedicated to improving the lives of the millions of Americans with food allergies through its extensive research, education, advocacy and awareness programs. In 2014, FARE expanded awareness activities to the entire month of May, encouraging Americans to take action and make an impact during Food Allergy Action Month.

FARE’s theme this year is “React with Respect,” which encourages the public to be respectful about food allergies. Too often, food allergies are not taken seriously or they are even made light of, despite the fact that they can potentially cause a life-threatening reaction.

“One of our goals is to help the general public understand the seriousness of this disease and recognize that allergic reactions can have dire consequences,” Baker said. “With food allergies, those affected are dependent on others such as caregivers, school staff and restaurant workers to help keep them safe. Working together, we can protect individuals with food allergies.”

As FARE continues to advance research toward future treatments for food allergies, this awareness campaign is critical to supporting the ability of individuals with food allergies to live safe, productive lives with the respect of others. FARE extends its appreciation to the Empire State Building for going teal and to the food allergy community for joining in efforts to raise food allergy awareness.

ABOUT FARE
Food Allergy Research & Education (FARE) works on behalf of the 15 million Americans with food allergies, including all those at risk for life-threatening anaphylaxis. This potentially deadly disease affects 1 in every 13 children in the U.S. – or roughly two in every classroom. FARE’s mission is to improve the quality of life and the health of individuals with food allergies, and to provide them hope through the promise of new treatments. Our work is organized around three core tenets: LIFE – support the ability of individuals with food allergies to live safe, productive lives with the respect of others through our education and advocacy initiatives; HEALTH – enhance the healthcare access of individuals with food allergies to state-of-the-art diagnosis and treatment; and HOPE – encourage and fund research in both industry and academia that promises new therapies to improve the allergic condition. For more information, please visit http://www.foodallergy.org.