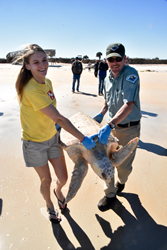 Join the South Carolina Aquarium Sea Turtle Rescue Program for the first public sea turtle release of the season. Five loggerhead turtles, including one that was blind when admitted to the Sea Turtle Hospital, will be released this Tuesday, May 10, at 4:30 p.m. at Isle of Palms County Park. The release is being held in partnership with the South Carolina Department of Natural Resources (SCDNR) and the Charleston County Park and Recreation Commission (CCPRC). Attendees should plan to carpool, arrive early, and expect to pay for parking at the county park. This release marks 187 threatened and endangered sea turtles rehabilitated and released into the wild by the Sea Turtle Rescue Program.

About the sea turtles:
Boyles: Boyles, a loggerhead sea turtle, was found floating in the Folly River in July 2014 by two local fishermen who noticed Boyles was behaving abnormally and unable to dive. This juvenile sea turtle had sustained a severe compression fracture to the shell, likely caused by a boat strike prior to being rescued. Treatment at admission included flushing the shell wound and administering vitamins, antibiotics and fluids. Boyles was then placed in a tank of shallow sea water where s/he displayed abnormal swimming behavior, a sign of neurological (brain) trauma likely caused by forces associated with the boat strike. In addition, the Aquarium’s veterinarian diagnosed Boyles with lockjaw, which required staff to provide daily physical therapy for two weeks to enable Boyles to open his/her jaw wide enough to eat properly. However, when Boyles’ diet was broadcast in the tank, s/he showed no ability to locate food on his/her own. The Aquarium’s veterinarian teamed up with veterinary ophthalmologist Dr. Anne Cook, a surgeon with Animal Eye Care of the Lowcountry, to assess Boyles’ eyesight. They determined that Boyles was clinically blind, likely the result of both neurological trauma associated with the boat strike and cataracts present in both eyes. Following cataract surgery expertly performed by Dr. Cook, staff observed no improvement in Boyles’ vision, and this turtle was deemed non-releasable due to clinical blindness. At that point long-time Aquarium volunteer Barb Gobien, not satisfied with Boyles’ non-releasable status, committed herself to helping Boyles regain his/her vision. Gobien created a therapeutic, time-intensive feeding regimen for Boyles which entailed rehabilitative therapy every single day for months. Excitingly, Boyles’ vision is now restored to the point where s/he is able to track live blue crabs and eat well on his/her own! We are happy announce that Boyles can now be returned to the wild.

Discovery: Discovery, a juvenile loggerhead sea turtle, was incidentally caught in a trawl net in the Charleston Harbor by the SCDNR Education Vessel Discovery in July of last year. Once aboard, biologists immediately knew this turtle was in poor health due to being observably underweight and lethargic. Upon admission to the Sea Turtle Hospital, it was determined that Discovery was severely debilitated; supportive care included antibiotics, fluid therapy and vitamins. Once placed in a tank of water, biologists observed that Discovery was not using his/her left rear flipper. A CT scan showed a fractured femur and massive separation at the hip joint. The Aquarium’s veterinarian determined that surgical intervention was not in this turtle’s best interest and that the flipper would heal best without stabilization. After months of rest and care, Discovery is now robust, healthy and able to properly use the left rear flipper while swimming. Discovery will be returned to the deep blue sea along with four other turtles this Tuesday.

Reece: Reece, a large adult female loggerhead sea turtle, was found last July mired in sand at the high tide line at Yawkey Wildlife Preserve. When this emaciated female was admitted to the Sea Turtle Hospital, team members provided supportive care including antibiotics, vitamins and fluid therapy. Hundreds of marine leeches were contributing to Reece’s anemic state at admission and were carefully removed from her mouth, nose and soft tissues. After 10 months of care, Reece now weighs 215 pounds and is in optimum health. This mature female, so valuable from a conservation standpoint, is ready to return to the wild and contribute to the recovery of the loggerhead sea turtle species.

Chaz and Quincy: Chaz and Quincy, two small juvenile loggerhead sea turtles, were part of a massive stranding event along the New England coast in January of this year. Both turtles were found near death and suffering from hypothermia after a severe cold front hit Massachusetts’ coastal waters. After being medically stabilized by the amazing crew at the New England Aquarium in Boston, the turtles were flown to Charleston to receive the long-term medical treatment necessary for a full recovery. After five months of care, they are ready to be released in the warm waters off of Isle of Palms, a perfectly appropriate habitat for this highly migratory species.

About cold-stunning:
Sea turtles are cold-blooded reptiles that depend on the environment to regulate their body temperature. Typically, sea turtles migrate to warmer waters when temperatures begin to drop in the fall. If they don’t make the migration before coastal water temperatures cool below about 50°F, they suffer from hypothermia, also known as cold-stunning. Symptoms of cold-stunning include a decreased heart and respiration rate, decreased circulation, and severe lethargy, followed by shock, pneumonia, frostbite and, in worst case scenarios, death.

To read about our patients or track their recovery progress, visit our Sea Turtle Rescue Program blog at scaquarium.org. Follow us on Facebook and Twitter for the latest updates from the hospital, including public sea turtle release details.

For all media inquiries, please contact Kate Dittloff at (843) 579-8660 or kdittloff(at)scaquarium(dot)org.

According to SCDNR, during the past 10 years the average number of sea turtle standings on South Carolina beaches each year is 138. Of these, roughly 10 percent are alive and successfully transported to the Sea Turtle Hospital. To date, the South Carolina Aquarium has successfully rehabilitated and released 182 sea turtles and is currently treating 14 patients. The average cost for each patient’s treatment is $35 per day with the average length of stay of nine months.