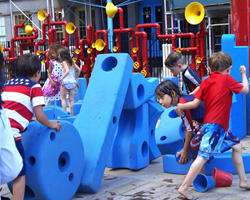 Partnering with camps and family centers to promote their summer Build-A-Thon events is our way of showing them thanks and support for all they do for their communities.

Contest entries are accepted throughout the year, but summer break is an especially popular time for parents and teachers to bring children to build. Camps and family centers see hosting a summer Build-A-Thon event as way to create excitement around their facility while enriching their summer activities. The events bring families and entire communities together, while giving children access to create with Imagination Playground Big Blue Blocks. Last year, over 1000 events were scheduled throughout the U.S.

Imagination Playground President and CEO David Krishock says, “The excitement is already growing around a new summer season of Build-A-Thon events that give so many children access to creative play. Partnering with camps and family centers to promote their events is our way of showing them thanks and support for all they do for their communities.”

There is no cost to participate as a Build-A-Thon summer event host, and Imagination Playground supplies all of the prizes. The events are also easy to run—children simply build, get photographed with their creations, and have their entry submitted by a parent or assisting adult.

Children participating in summer Build-A-Thon events are excited to compete along with other child builders throughout the U.S. Winners are selected and announced at the end of the year.

Family centers and camps interested in receiving support from Imagination Playground on hosting a Build-A-Thon summer event should call 1-678-604-7466 or email ContactUs(at)ImaginationPlayground(dot)org.

For more information about Build-A-Thon and to view past winners, please visit
http://www.imaginationplayground.com/promotions/build-a-thon.