TifTuf™ Bermuda grass, the newest bermuda grass cultivar acclaimed for superior drought resistance and minimal water requirements, is now available for purchase from NG Turf. TifTuf™ is the product of more than two decades of research and testing by the turfgrass scientists at the University of Georgia's Tifton campus. 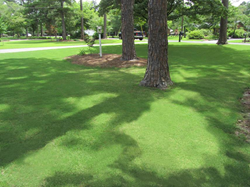 TifTuf™ sets the new industry standard for sustainability and drought resistance. It is destined to become a customer favorite for both residential and commercial applications.

TifTuf™, originally bred in 1992 at the University of Georgia’s Tifton campus, was one of more than twenty-seven thousand cultivars studied. Throughout more than two decades of testing, Tiftuf™ proved itself to be the best performing cultivar under drought conditions. Among the 90 cultivars that passed initial drought tolerance testing, TifTuf™ maintained its quality and green color the longest.

“TifTuf™ sets the new industry standard for sustainability and drought resistance,” explains Aaron McWhorter, President of NG Turf. “Not only does it actually need less water to thrive, it boasts superior wear tolerance, early spring green up, excellent fall color retention, and rapid grow-in rates. TifTuf™ is destined to become a customer favorite for both residential and professional applications.”

TifTuf™ has fine, bright green blades and a rapid growth rate, allowing for faster establishment and quicker recovery from injury. It also displays superior insect and disease resistance; grows well in both sun and shade; maintains a healthy appearance even under heavy traffic; and maintains density, color, and vigor while using less water than other varieties. Like all bermudagrasses, TifTuf™ is a warm season turf, going dormant in winter, so TifTuf™ can be harvested and installed year round.

McWhorter adds, “Initially, researchers thought TifTuf’s excellent performance under drought conditions was due to a deeper root system, but further studies showed that it actually uses less water to thrive – an impressive 38% less water than TifWay, the current industry-standard bermudagrass. What an incredible benefit to us here in the south with our frequent hot, dry summers.”

The Turfgrass Group, co-owned by Aaron McWhorter and Ken Morrow, is the exclusive licensing company for the production of TifTuf ™ bermudagrass.

Ken Morrow reports, “With the extreme drought conditions recently experienced in California and around the United States, there has never been a greater need for a drought-tolerant grass like TifTuf™. We know it will create sustainable, environmentally friendly lawns, sports fields, and golf courses around the country that use significantly less water than other grasses available on the market today.”

To learn more about TifTuf™, or any of their ten other proprietary sod varieties, please contact NG Turf at (770) 832-8608 or visit them online at ngturf.com.