The Best IDE Software According to G2 Crowd Spring 2016 Rankings, Based on User Reviews 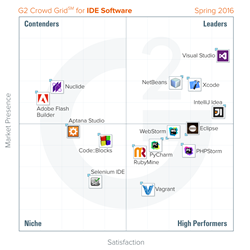 The Grid leverages customer satisfaction data reported by authenticated users along with vendor market presence determined from social and public data. Based on a combination of these scores, each software solution is categorized as a Leader, High Performer, Contender, or Niche.

About the IDE Grid report: