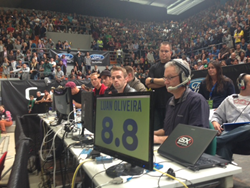 ISX has been ingrained as the scoring technology driving Street League Skateboarding’s unique format since the league launched in 2010.

The easy-to-follow format and instantly available results not only enable pros like Luan and Nyjah to strategize their run, but also provides engaging storytelling...

ISX Scoring, the real-time scoring and stats system for fast-paced, action sports and live events, has expanded its scope of capabilities by adding turn-key, end-to-end solutions for all timed racing events, from scoring to graphics, with an unmatched foundation combining data into compelling storytelling.

Signed for the upcoming season, ISX will be on the job at the Rob Dyrdek-founded Street League Skateboarding Nike SB World Tour, Vans Pool Party, and the Monster Energy Cup.

Added co-president David Paull who also heads partner company Dialsmith, “Through our robust data gathering, processing, and reporting technologies, ISX enables a unique and entertaining competition format. Every trick and run count, and scores are compiled and displayed in real-time, giving everyone—from the viewers to the competitors—instant access to the results of the competition as they unfold.”

ISX has been ingrained as the scoring technology for SLS, driving the unique format since the League launched in 2010. ISX Scoring is back as SLS’s official scoring and stats partner for both the 2016 SLS Nike SB Pro Open and the SLS Nike SB World Tour.

Brian Atlas, President & COO at SLS said, “With its revolutionary, real-time scoring technology, ISX Scoring is an integral part of our success. The easy-to-follow format and instantly available results not only enable pros like Luan and Nyjah to strategize their run, but also provides engaging storytelling and brings the excitement of the traditional ‘buzzer beater’ suspense and action to both our live in-arena and at-home fan base.” The season kicks off with the SLS Nike SB Pro Open in Barcelona, Spain, on May 21 and May 22. Find out how to watch the contest live on the SLS site.

Justin Regan, Head of Global Sports Marketing at Vans Skateboarding, added, “We're thrilled to have ISX back for the third year in a row, adding the excitement of live, instant scoring to the intense, non-stop action that goes down at the Vans Pool Party, bringing the intensity and energy to fans at the ‘Bowl,’ as well as our webcast audience watching online. This continues to be a great partnership for Vans, our participants and our fans.”

ISX will be back on hand this fall to provide live, instant scoring, along with sport organizing services, when the Monster Energy Cup returns to Las Vegas with BMX competitions and the fabled Dirt Shark Biggest Whip!

ISX Scoring is developed, marketed, and run through a joint partnership between TAUBLIEB Films, Dialsmith, and Rob Dyrdek. The system uses hand-held dials built on Dialsmith’s Perception Analyzer® platform combined with proprietary software and a graphic interface that instantly captures participant scores and statistics, and displays them in a real-time, visually dynamic and kinetic fashion. Judges use the hand-held dials to continuously and instantaneously evaluate every trick, run and element as well as a competitor’s overall performance—all of which is presented using state-of-the-art graphics. This fan- and viewer-friendly format enables television viewers and live audiences to see exactly what the judges are reacting to in real-time, dramatically enhancing the viewing impact and entertainment experience. More info can be found on the newly launched ISX Scoring site.