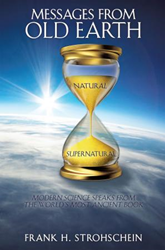 Frank H. Strohschein’s new book, Messages From Old Earth - Modern Science Speaks From The World’s Most Ancient Book, ($16.99, paperback, 9781498470957; $26.99, hardcover, 9781498470964) explains some of the most cutting-edge science discoveries and how the Bible spoke of those discoveries thousands of years ago, but modern science has just discovered them. He will teach the science lover about the Bible and the Bible lover about science – encouraging the belief that the Bible is a divinely inspired Book. He provides the believer with new insights into some familiar scriptures and some other verses in a unique, brand new perspective.

The author wants readers to see that the Bible is scientifically accurate and it can be trusted. The science in Messages from Old Earth is not Voodoo Science; it is the same science that students will learn in the colleges and universities of the world. He believes that since the All-Wise One inspired the Bible, the Bible can be a source to speculate about new discoveries yet to be discovered by science.

“Dr. Martin Luther King, Jr. had a dream that one day color would no longer separate humans,” states the author. “I have a dream that Christians will no longer be separated from science. Just as it was the religious leaders of 2,000 years ago, that crucified the Perfect One, so it is the blind religious people of our day that have been the greatest enemies of the Bible by teaching that the Bible and Science conflict. I challenge you to make the leap, harmonize modern Science and the Bible and see that what I say in Messages from Old Earth is valid.”

Frank H. Strohschein has spent many years studying the two disciplines that he loves, the Bible and Science. He has completed courses – more than 300 college hours of education – from seven different colleges and Bible degrees from two colleges. For the past eleven years, he worked as a writer in corporate America. It was in this context that he was encouraged by his coworkers to gather his insights from years of study into this book – a book Frank considers to be his magnum opus.

Xulon Press, a division of Salem Media Group, is the world’s largest Christian self-publisher, with more than 15,000 titles published to date. Retailers may order Messages From Old Earth – Modern Science Speaks From The World’s Most Ancient Book through Ingram Book Company and/or Spring Arbor Book Distributors. The book is available online through xulonpress.com/bookstore, amazon.com, and barnesandnoble.com.