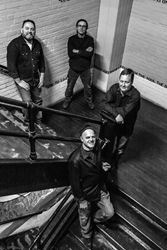 "Everybody has a record that they go back to again and again. With just one listen, it’s easy to imagine that Benedict DollyRockers will be next."

Every band has a different story. Some are introduced to classical, while others get into harder stuff. For lifelong friends, the Benedict DollyRockers, their story starts with garage punk.

The Benedict Doll Brewery operated in their hometown of Coldwater, MI from the 19th century up through prohibition. The inspiration for the band’s name came from scattered Benedict Doll beer bottles still found along the railroad tracks, the band’s style evolved into their own hybrid Americana sound.

“Some might say we sound like REM or Neil Young,” notes Jim McMillan (Vocals / Guitar), “but I think it’s more the sound of life right now. The music captures where we are in the world.”

Love found and lost, being left out and let down – tracks like “Pebbles In Piles” and “Who’s Gonna Mourn” reflect that world – Rural life in towns such as Coldwater and Southwest Michigan. But with a nod to a classic artist, and in their own inimitable style, the band tackles another icon: Frank Zappa.

Flip Miller explains, “Charva has been part of our set list forever. It’s a somewhat deep cut even for Zappa fans, but it’s one of our favorites and it sounds right at home on this project.”

Everybody has a record that they go back to again and again. For some it’s Jeff Buckley’s “Grace.” For others it’s “After the Goldrush.” With just one listen, it’s easy to imagine that Benedict Dollyrockers will be next.