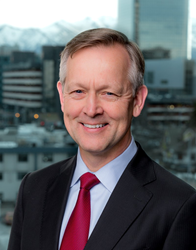 Judge Rabinowitz left his indelible stamp on life in Alaska, and I am honored to accept this award given in his name.

Stoel Rives is proud to announce that James E. Torgerson, firm managing partner, has been honored with the Jay Rabinowitz Public Service Award, presented by the Alaska Bar Foundation for his commitment to public service.

Given each year since 2003, the award is bestowed by the board of trustees of the Alaska Bar Foundation to an individual whose life’s work has demonstrated a dedication to public service in Alaska. The award is funded through gifts from the public in honor of the late Alaska Supreme Court Chief Justice Jay Rabinowitz.

“I am truly humbled to receive this honor from the Alaska Bar Foundation, particularly as it bears the name of Justice Jay Rabinowitz, who dedicated his career to ensuring access to justice for all Alaskans,” said Torgerson. “Alaska wasn’t even a state when Judge Rabinowitz moved here, and he spent the rest of his life helping to shape the young state and its legal system and public bodies into the Alaska we know today. Judge Rabinowitz left his indelible stamp on life in Alaska, and I am honored to accept this award given in his name.”

Raised in New York, Rabinowitz moved to the territory of Alaska in 1957 to become a law clerk to U.S. Territorial Court Judge Vernon Forbes. He then served as an Assistant U.S. Attorney before being appointed to Superior Court at age 33 and, five years later, to the Alaska Supreme Court, where he served for 32 years. Access to justice for all Alaskans was one of his guiding principles, once observing that "the judiciary in a multiracial jurisdiction, such as Alaska, must be peculiarly sensitive to racial discrimination.” He oversaw the establishment of superior courts in rural areas and the expansion of the magistrate system for smaller villages. When Rabinowitz died, on June 16, 2001, Alaska Gov. Tony Knowles ordered the state’s flags to be flown at half-staff in honor of the jurist whose “steady, thoughtful manner resulted in a body of law that will have a lasting impact on Alaska.”

Like Rabinowitz, Torgerson was raised elsewhere – in his case, Minnesota – and moved to Alaska where he began his legal career. He spent most of the early years of his practice in Alaska’s U.S. Attorney’s office. He then became managing shareholder of the Anchorage office of an international law firm for 10 years, before joining Stoel Rives in 2008 as the founder and managing partner of the firm’s Anchorage office. Over the years, he helped to grow that office to 14 attorneys representing many Alaska Native corporations. Torgerson served on Stoel Rives’ executive committee and, in January 2016, was named firm-wide managing partner. That appointment made history, as he is the first Alaska-based managing partner of a major law firm in the United States.

Professionally, Torgerson has helped lead efforts to ensure equal access to justice for all Alaskans, including Alaska Natives. He was appointed to represent the federal court on the Alaska Rural Justice and Law Enforcement Commission, created by Congress in 2004 to address rising trends of alcohol use, domestic violence, child abuse and other challenges in Alaska Native villages, many of which are rural and far removed from any official law enforcement or legal resources.

Additionally, Torgerson served as a board member and later vice president of the Disability Law Center and today co-chairs the fundraising campaign for Alaska Legal Services, which raises money to provide civil legal assistance to those who would otherwise be unable to afford legal counsel. He co-founded Anchorage Youth Court, an innovative approach to juvenile law enforcement that gives teenagers accused of misdemeanors the opportunity to be judged by their peers and to resolve their legal issues with community service sentences that lead to no formal criminal record. He currently serves as one of the lawyer members of the Alaska Judicial Council, which recommends judicial candidates to the Governor of Alaska and makes retention recommendations for judicial incumbents.

Civic organizations in Alaska also have called upon Torgerson’s leadership over the years. He has served on a dozen boards of directors, including the Alaska Center for the Performing Arts, Anchorage Symphony Orchestra, Anchorage Museum Foundation, and he currently co-chairs the endowment campaign for the Alaska Community Foundation.