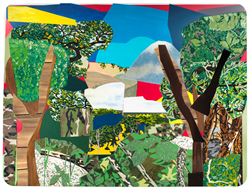 African-American art and culture are an important focus in the Museum’s collections and exhibition history.

Building on the Museum’s historic role as a leader in collecting and exhibiting African-American art, a new exhibition at the Newark Museum will present a distinguished group of works by leading modern and contemporary artists. Modern Heroics: 75 Years of African-American Expressionism at the Newark Museum explores expressive painting and heroic themes through 34 works of painting and sculpture. Covering a broad span from the 1940s to the present, the exhibition is organized almost entirely from the Museum’s permanent collection of American Art, with a few additional works loaned by artists and private collectors in New Jersey.

On view from June 18, 2016 through January 8, 2017, Modern Heroics will showcase works by founding figures of the Harlem Renaissance and the Spiral group, along with a diverse selection of contemporary artists. Works by a number of self-taught artists will also be included, highlighting the strength of Newark’s collection of Folk and Self-Taught art. Featuring large-scale paintings by Norman Lewis, Purvis Young, Emma Amos, Bob Thompson and Mickalene Thomas, Modern Heroics will also include rarely-exhibited works by Romare Bearden, Minnie Evans, Herb Gentry, and Emilio Cruz, among others; and sculpture by Chakaia Booker, Kenseth Armstead, Kevin Sampson and Thornton Dial.

Mythical and universal subject matter, the bold use of color and large scale, and a direct engagement with materials — gestural approaches to painting and inventive sculptural forms —are themes that the exhibition will highlight. Approximately half of the works on display will be by self-taught artists, and several works will be shown for the first time in this exhibition. Through this strategic selection of artists, Modern Heroics will open up a conversation that looks beyond traditional categorizations including “self-taught,” “folk” and “outsider art,” and foster a broader appreciation for all of the works on view.

“Modern Heroics is a focused exploration of expressionism across a diversity of styles and subjects,” said the exhibition curator, Tricia Laughlin Bloom, Ph.D., Curator of American Art. “All of the works in the show have a strong physical quality, and many are layered with symbolism and multiple narratives.”

“African-American art and culture are an important focus in the Museum’s collections and exhibition history. By presenting a selection of works by both prominent and lesser known artists, this exhibition will open up new perspectives and insights on narrative abstract painting in America as well as on artists that remain underrepresented in museums,” said Newark Museum CEO and Director Steven Kern.

Modern Heroics: 75 Years of African-American Expressionism at the Newark Museum will be documented with a fully illustrated catalogue, published by the Newark Museum. A one-day symposium bringing together scholars of African-American art and artists from the exhibition is planned for October 15th, 2016. Speakers will include Lowery Stokes Sims, Curator Emerita, Museum of Arts and Design, and Leslie King-Hammond, Graduate Dean Emmeritus and Founding Director of the Center for Race and Culture at the Maryland Institute College of Art.

This exhibition is sponsored by The Robert Lehman Foundation; Newark Museum Volunteer Organization; Arlene Lieberman; Judy Lieberman; and United Airlines. Additional support provided by The Marie and Joe Melone Exhibition Fund for American Art; and Elizabeth Richards Family Foundation Endowment Fund. For additional information, follow the Museum on Facebook at facebook.com/newark.museum or Twitter at twitter.com/newarkmuseum; or by visiting http://www.newarkmuseum.org.