Charlotte Celebrates 241 Years of Visionary History: Events Honor the Anniversary of the Signing of America's First Declaration of Independence, the MeckDec

This weekend, Charlotte will celebrate the 241st anniversary of the signing of America’s original declaration of independence, the Mecklenburg Declaration of Independence (MeckDec). Local groups are offering a series of events throughout the weekend to mark the occasion. 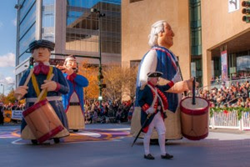 Charlotte will celebrate the 241st anniversary of the signing of the MeckDec on May 20 and 21, with events throughout the city.

Charlotte pioneered the American ideal of liberty when it created America's first declaration of independence -- the MeckDec -- in May 1775."

This weekend, Charlotte will celebrate the 241st anniversary of the signing of America’s original declaration of independence, the Mecklenburg Declaration of Independence (MeckDec). Local groups are offering a series of events throughout the weekend – many of them free – to mark the occasion.

The May 20th Society and The Charlotte Museum of History are partnering with the Charlotte Independence and the Charlotte Knights to bring the city a weekend of events that celebrate Charlotte’s visionary history and the role of its people in pioneering the American ideal of liberty.

“The MeckDec celebrations are about honoring Charlotte’s heritage and our spirit of independence, leadership and courage,” said Scott Syfert, president of The May 20th Society. “Charlotte was right in the thick of things in terms of revolutionary thought in the early days of our nation. It’s a story many Charlotteans do not know, and we want to change that.” Syfert is author of the book “The First American Declaration of Independence? The Disputed History of the Mecklenburg Declaration of May 20, 1775.”

“Charlotte and Mecklenburg County were on the forefront of revolutionary action,” said Kay Peninger, president and CEO of The Charlotte Museum of History. “Men like Hezekiah Alexander, and other patriot leaders who are remembered as signers of the Mecklenburg Declaration of Independence and the Mecklenburg Resolves, were willing to risk their lives and fortunes for the tradition of English liberty that was being infringed upon by Great Britain.”

The following events mark the 241st anniversary of May 20, 1775, the date of the signing of the MeckDec.

Friday, May 20, 11 a.m.-5 p.m.
Previously unseen historic documents related to the MeckDec will be on display for the first time ever in Founders Hall at Bank of America’s Corporate Center in uptown (100 N. Tryon St.). The papers have lain dormant in the Wilson Library at the University of North Carolina at Chapel Hill for decades. They include a document by an unknown author that some historians have called the “Rosetta Stone” of the MeckDec and also the handwritten notes of John McKnitt Alexander, the keeper of the original MeckDec papers.

Friday, May 20 at noon
Independence Square, corner of Trade and Tryon streets
The May 20th Society’s annual commemoration of the signing of the MeckDec will include military and Colonial re-enactors, historical readings, revolutionary segwalloons, cannon firing and good old American-style patriotic celebration. This year’s celebration will be special because it will include the dedication of a new historical marker honoring the signing of the Mecklenburg Resolves on May 31, 1775. The Resolves are believed to be the successor document to the MeckDec. Past MeckDec celebrations have included former presidents (Taft, Wilson, Eisenhower and Ford), military generals, a first lady and countless dignitaries. This year marks the 100th anniversary of President Woodrow Wilson’s visit to Charlotte to celebrate MeckDec Day.

Friday, May 20 at 12:30 p.m.
Settler’s Cemetery, corner of Fifth and Church streets
Immediately following the noon commemoration, a new marker will be dedicated in Settler’s Cemetery in memory of Revolutionary War patriot Ephraim Brevard.

Saturday, May 21, 10 a.m. – 2 p.m.
The Charlotte Museum of History, 3500 Shamrock Dr.
The Charlotte Museum of History will host its annual celebration of the Mecklenburg Declaration of Independence and Resolves. This family-friendly celebration includes crafts, such as making your very own MeckDec book and creating animals of the Backcountry. The Museum will offer free tours of the Hezekiah Alexander Home Site (c. 1774) – the oldest existing home in Mecklenburg County – where people can learn about Alexander’s leadership in the years that led to the American Revolution. A special presentation by docent Tom Phlegar on the “Southern Campaign of the American Revolution” will be offered at 11 a.m. The day’s events are all free and open to the public and include cake and lemonade.

Saturday, May 21, at 6:05 p.m.
BB&T Ballpark, 324 S. Mint St.
MeckDec Day at the Ballpark with the Charlotte Knights. Fans of history and baseball can join The May 20th Society and The Charlotte Museum of History at BB&T Ballpark to watch the Knights take on the Gwinnett Braves. The game will include lots of MeckDec fun – Capt. James Jack will throw out the first pitch, and historical re-enactors will greet fans.

About the Mecklenburg Declaration of Independence

The history of the MeckDec began soon after news of the battles of Lexington and Concord arrived in Charlotte Town (present-day Charlotte). The following day, on May 20, 1775, prominent civic leaders adopted The Mecklenburg Declaration of Independence (MeckDec) – the first declaration of independence in America.

The MeckDec itself is steeped in mystery and controversy. There are no records of its publication before 1819, and many historians doubt it ever existed. But it is memorialized on North Carolina’s state flag and its state seal, where the date May 20, 1775, appears.

There is no doubt about the existence of the MeckDec’s companion document, the Mecklenburg Resolves. A committee of local militia members adopted these “resolves,” or resolutions, and signed them on May 31, 1775. They were reported on and published in their entirety less than a month later in The South Carolina Gazette newspaper. They declared all royal authority to be suspended and laid out a plan for how Mecklenburg County would govern itself. This year’s MeckDec celebration at Independence Square at noon on Friday, May 20, will include the dedication of a new historical marker honoring the Mecklenburg Resolves.

About The May 20th Society

The Society promotes Charlotte’s rich history of being the first American colony to declare independence from Great Britain. On May 20, 1775, more than two dozen colonial civic leaders from Mecklenburg County approved and unanimously adopted the Mecklenburg Declaration of Independence. In honor of this historic occasion, The May 20th Society hosts several ceremonial events including live re-enactments, a speaker series featuring renowned historians, and annual noon commemoration in Uptown. For more information, visit http://may20thsociety.org/.

About The Charlotte Museum of History

The Charlotte Museum of History engages a broad public audience in the history of the Charlotte region through the stories of its people, places and events in order to promote dialogue and historical perspective. The Museum is the steward of the Hezekiah Alexander House (ca. 1774) and home site, a National Register of Historic Places site and the oldest existing home in Mecklenburg Country. Hezekiah Alexander was a leader in the years that led to the American Revolution and served on the committee that drafted North Carolina’s 1776 constitution and bill of rights. Historic Charlotte and The Charlotte Museum of History joined forces in January 2016, with a shared mission of preserving Charlotte’s history. For more information, visit charlottemuseum.org or follow us on Facebook and Twitter (@CLThistory).