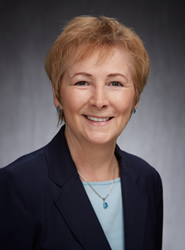 River City Bank names Elaine Lintecum as the newest member of its board of directors.

“Ms. Lintecum’s extensive experience for one of the oldest, largest and most respected newspaper and digital publishers in the U.S. will be a great asset to our board,” said River City Bank President and CEO Steve Fleming.

River City Bank is pleased to announce the appointment of Elaine Lintecum to its board of directors. Lintecum currently serves as Chief Financial Officer (CFO) at The McClatchy Company, a national newspaper and digital news publisher headquartered in Sacramento. Her addition to the River City Bank board signals a continued emphasis on the Bank’s growth and geographic expansion; the Bank experienced 27 percent loan growth in 2015 and recently opened a branch in Walnut Creek – its first Commercial Banking office in the San Francisco Bay Area – while also expanding into Southern California.

“Ms. Lintecum’s extensive experience in accounting, finance, treasury management, and M&A for one of the oldest, largest and most respected newspaper and digital publishers in the U.S. will be a great asset to our board,” said River City Bank President and CEO Steve Fleming. “As River City Bank continues to extend its premier commercial banking services to new markets and gain market share in Sacramento, we will undoubtedly benefit from her leadership in building McClatchy’s reputation on a national stage while remaining deeply connected to the local Sacramento community.”

“On behalf of the board, we are pleased to welcome Elaine Lintecum,” said Shawn Devlin, chairman of the board, River City Bank. “Elaine lives in the community and brings knowledge of Sacramento’s rich history along with a solid understanding of the intricacies of corporate finance on a national scale that will complement River City Bank’s commitment to providing superior financial services locally and in other markets.”

Lintecum received a Bachelor of Science in Business Administration and Accounting from California State University Chico, and she has played an instrumental role in every major financial development at McClatchy for almost three decades. She is a member of the Mergers and Acquisitions team and serves on the boards of The Seattle Times Co. and Ponderay Newspring Company. Prior to joining McClatchy, Ms. Lintecum was a Certified Public Accountant with Deloitte Haskins & Sells.

ABOUT THE MCCLATCHY COMPANY:
The McClatchy Company is a 21st century news and information leader, publisher of iconic brands such as the Miami Herald, The Kansas City Star, The Sacramento Bee, the Charlotte Observer, The (Raleigh) News and Observer and the (Fort Worth) Star-Telegram. McClatchy operates media companies in 28 U.S. markets in 14 states, providing each of its communities with high-quality news and advertising services in a wide array of digital and print formats. McClatchy is headquartered in Sacramento, Calif., and listed on the New York Stock Exchange under the symbol MNI.