SkyRanger will be integrated and deployed as a “friendly asset” within AUDS to broaden the threat detection and situational awareness capabilities of the AUDS platform, which was recently added to the FAA’s Pathfinder Program. 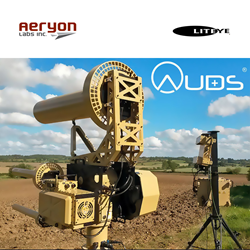 Public safety, domestic security, and other agencies will have the ability to deploy the Aeryon SkyRanger within AUDS protection area

"The integration with AUDS illustrates Aeryon’s commitment to resolve the totality of our customers’ UAS needs, and reinforces the distinction between SkyRanger and other UAS." said Dave Kroetsch, President & CEO, Aeryon.

Aeryon, the premier manufacturer of small unmanned aerial systems (sUAS) and Liteye Systems, a leading manufacturer and provider of products that protect critical infrastructure, today announced the integration of the Aeryon SkyRanger into the AUDS counter-UAS platform to provide public safety, domestic security, and other agencies with the ability to deploy SkyRanger within AUDS protection area to identify and respond to threats posed by enemy UAS.

AUDS is a second generation counter-UAS system that detects, tracks, identifies, and defeats unmanned vehicles. Developed by a partnership of companies in the UK and USA, the AUDS system is an integrated solution comprising of fielded and proven systems that protects critical infrastructure through state-of-the-art radar, precision thermal and daylight cameras, advanced video tracking, and five non-kinetic defeat capabilities that limit collateral interference. The full production system has been tested in numerous countries against Class-1 and Class-2 commercial UAS as well as homemade versions.

On May 9, 2016, the FAA announced the execution of a Cooperative Research and Development Agreement (CRADA) with Liteye, adding AUDS into the FAA’s Pathfinder Program.

The integration with the secure, all-digital network of the SkyRanger enables the AUDS operator to:

“Many of the agencies looking at deploying AUDS are already operating Aeryon UAS,” said Dave Kroetsch, President and CEO, Aeryon. “The integration with AUDS illustrates Aeryon’s commitment to resolve the totality of our customers’ UAS needs, and reinforces the distinction between SkyRanger and other UAS.”

Thomas Scott, President of Liteye said “Other UAS countermeasures platforms only deal with unfriendly UAS, but don’t account for the operator of that UAS or other unfriendly personnel that may be present. Since AUDS is simultaneous ground and air surveillance, by deploying the SkyRanger within the AUDS platform, AUDS is able to identify the operator of the unfriendly UAS and direct other ground-based or aerial assets to address the threat.”

A live demonstration of the AUDS system will occur on May 19th and 20th in Colorado. Please contact Liteye Systems for more information.

About Liteye Systems
Liteye Systems, Inc. is a leader in surveillance systems for protection of critical infrastructure. Their products include radars, covert thermal cameras, tactical displays, and the new AUDS counter UAS system. All of its cutting edge solutions feature revolutionary designs that enable a broad range of military and commercial applications. Headquartered in Centennial Colorado, the company has offices in the UK and representatives worldwide. AUDS is a partnership of Chess Dynamics, Enterprise Control Systems, Blighter surveillance, and Liteye. Liteye leads the AUDS North American effort.

About Aeryon Labs Inc.
Aeryon Labs is the premier manufacturer of small Unmanned Aerial Systems (sUAS) which are at the center of major world events and international media stories. The company is the trusted partner of civil and military customers, resellers, and other commercial business partners around the globe. Aeryon is headquartered in Waterloo, Ontario, Canada. Field-tested and mission-proven, Aeryon sUAS set the standard for immediate aerial intelligence gathering by anyone, anywhere, anytime, for a wide range of military, public safety and commercial applications.