The spirit of Karabakh pervades Windsor 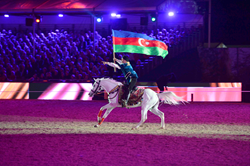 The Azerbaijani riders delighted the equestrian crowd with their fearless dexterity

I am sure that the horses, like the internally displaced persons, would wish to return to their ancient ancestral lands.

No fewer than 15 glorious purebred Karabakh Horses participated in this year’s Royal Windsor Horse Show, held in the grounds of Windsor Castle to celebrate the 90th birthday of H.M. Queen Elizabeth II, a renowned horse-lover. The event took place from 11–15 May, and the Azerbaijani participation was organised by the Azerbaijani Ministry of Culture and Tourism, the Azerbaijani Equestrian Federation (ARAF) and The European Azerbaijan Society (TEAS). The horses are renowned for their agility, good temper, speed, and for their magnificent gleaming hair.

Each day culminated with a pageant that saw these majestic beasts put through their paces under the excellent equestrianism of some of the finest Azerbaijani riders. The participation of the Karabakh Horses was particularly apposite as Zaman – a stunning example of the breed – was given to H.M. The Queen exactly 60 years ago by the Soviet government. He went on to live a comfortable and cossetted life in the Royal Mews. The participation of the Karabakh Horses was accompanied by a specially-choreographed performance from members of the Fikret Amirov Azerbaijan State Song and Dance Ensemble.

The involvement of the horses was complemented by an Azerbaijani Cultural Pavilion that encapsulated the very essence of Azerbaijan. It displayed colourful handmade carpets, national dress, literature, architecture and cay (black tea) from a samovar, all accompanied by the strains of Rafiq Rustamov and Elchin Abbasov, two of the foremost exponents of mugham on the Azerbaijani tar, alongside Toghrul Asadullayev (kamancha) and Khamiz Jafarov (nagara). Members of the Fikret Amirov Azerbaijan State Song and Dance Ensemble were unable to resist the temptation to dance to the captivating music and performed impromptu dances for a delighted audience, who clapped along to the music.

This attracted a great deal of interest from the multinational crowd, many of whom had travelled from around the world to this remarkable celebration of all things equine. All attendees were full of curiosity about the Azerbaijani Karabakh Horse, the genetic development of the breed; its use in historic military campaigns; and the background to chovkan, the Azerbaijani antecedent of polo. They also asked questions about the country, its geopolitical position, and indicated a great interest in its tourist potential.

Lionel Zetter, Director, TEAS said: “The presence of the Azerbaijani Karabakh Horse at the Royal Windsor Horse Show is extremely significant. Six decades after Zaman entered the Royal Mews, 15 examples of the breed will be seen dancing and trick-riding. Azerbaijanis are well aware of the significance of the Karabakh. Like hundreds of thousands of Azerbaijanis, the horses were forced to feel Nagorno-Karabakh by invading Armenian armed forces. I am sure that the horses, like the internally displaced persons, would wish to return to their ancient ancestral lands.”

As would be expected, the story of the Karabakh Horse is inextricably interwoven with that of the ongoing Armenian–Azerbaijani conflict over Nagorno-Karabakh. In 1993, as the flames, explosions and sounds of bombs resounded, dedicated employees of the Agdam Stud moved the breeding stallions to stop them falling into enemy hands, followed by the mares and foals. Many of the pregnant mares perished en-route, and eventually the ‘refugee horses’ were kept at Baku racecourse. They were subsequently moved to Agdam, not far from their birthplace, but with sufficiently different climate to necessitate a period of acclimatisation. There are currently around 1000 Karabakh horses in the world, and they are facing extinction.