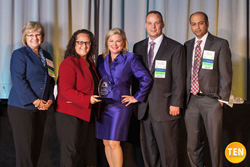 We encourage executives and their teams to consider their work over the past 12-18 months and take advantage of this opportunity to benchmark against other high-caliber security programs in the region.

T.E.N., an information technology and security executive networking and relationship-marketing firm, announced today that nominations will be accepted May 23, 2016 through August 5, 2016 for the 2016 Information Security Executive® (ISE®) Northeast Awards.

Awards include the Information Security Executive® of the Year, which recognizes executives who have made a positive impact on their organizations through risk management, data-asset protection, regulatory compliance, privacy and information security; and the ISE® Project of the Year, which recognizes a project completed during the previous 12-18 months that has had a significant impact on an organization’s risk management or information security posture. Eligible nominees meet all appropriate criteria and are based in the U.S. Northeast territory, which includes Connecticut, Delaware, Maine, Massachusetts, New Hampshire, New Jersey, New York, Pennsylvania, Rhode Island, Vermont and Washington DC.

Executives and/or project teams can be self-nominated in addition to entries by supervisors, employees, peers or technology partners. Anyone interested in nominating for the ISE® Northeast Awards may download the forms here. All nominations are sent to T.E.N.’s distinguished panel of ISE® Judges for review and scoring.

“The Northeast is home to many of the nation’s most innovative companies and forward thinking leaders,” said T.E.N. CEO & President Marci McCarthy. “We encourage executives and their teams to consider their work over the past 12-18 months and take advantage of this opportunity to benchmark against other high-caliber security programs in the region.”

Nominees, finalists and winners will be recognized at the ISE® Northeast Executive Forum and Awards on October 4, 2016 at the Westin Times Square in New York City, NY. The Executive Forum will include keynote speakers, interactive roundtables moderated by the CISOs and VPs of participating companies and engaging panel discussions. Finalists and winners in both categories are announced at the awards gala that evening and recognized through press coverage and inclusion on the T.E.N. and ISE® websites. Organizations taking part in previous programs have included leading organizations, such as ADP, Allergan, AT&T, BNY Mellon, Comcast, New York Life, and Skillsoft.

Our distinguished ISE® Judges are past nominees representing a cross section of industries, including commercial, government, health care and academic sectors. For this reason, the ISE® Awards represent the best achievements of the year as evaluated by those regarded as the industry's most influential and successful thought leaders. Coupled with a one or two-day executive summit, the ISE® Awards are held across the country and Canada in major cities including Atlanta, Chicago, Dallas, New York and San Francisco. The ISE® Awards Program Series has reached more than 10,000 executives across a broad range of industries and has been a major influence in executives’ careers, knowledge sharing, and the development of peer-to-peer relationships.
# # #

Note to editors: Trademarks and registered trademarks referenced herein remain the property of their respective owners.