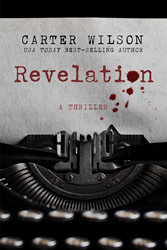 Follow Harden Campbell on this harrowing journey and watch your knuckles whiten as you try and hold on.

The Story:
When Harden Campbell wakes cold and beaten in a dirt-floor cell, he finds only three other things in the room with him: the mutilated body of his good friend, an ancient typewriter, and a stack of blank paper, the top sheet of which has a single, typed sentence.

Tell me a story.

He knows the message is from Coyote, his brilliant, megalomaniacal roommate whose lust for power and reverence has recently revealed him for the true sociopath he is. Now, as the founder of a new religion with disturbing roots―Revelation―Coyote's most evil side has emerged.

From the moment Harden sees that stack of paper, he knows his one chance of escape is through his own words, and only his ability to successfully recount the dark story of what happened over the past year at Wyland University will determine whether he lives to see the woman he loves once again―or is silenced forever.

This will be the most difficult story Harden has ever written, and each word must be chosen with the utmost care. Because Coyote will be reading each and every one of them.

The Reviews:
"Revelation will test your talent at turning pages quickly. As you go, you will be reading a story about a story that holds the key to one man's salvation and accounts for another man's warped and violent attempts to establish new truths based on the power of storytelling. Revelation is a cautionary tale about the intensity and demands of religion, except 'cautionary' and 'tale' both sound much too tame. Follow Harden Campbell on this harrowing journey and watch your knuckles whiten as you try and hold on."
―Mark Stevens, author of The Allison Coil Mystery Series including Lake of Fire

"Here's a thriller that thrills, a mystery that mystifies."
—Booklist

About the Author:
USA Today bestselling author Carter Wilson was born in New Mexico and grew up in Los Angeles before attending Cornell University. His thriller and suspense novels have received critical acclaim, including starred reviews from Publishers Weekly and Library Journal, and have been finalists for the INDIEFAB Book of the Year and the Colorado Book Awards. Revelation is Carter's fourth novel. Learn more at http://www.CarterWilson.com

Carter Wilson, Best-Selling Author of Revelation and The Comfort of Black