Art exhibition features 42 of the museum’s dynamic paintings of the 19th century American West by Frederic Remington, Charles M. Russell and their contemporaries along with three bronze sculptures by Remington and Russell and one Russell painting on loan from a private collection. 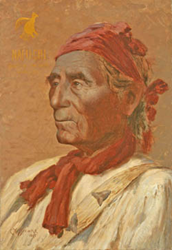 ‘Legacy’ presents themes that occupied Russell, Remington and their contemporaries throughout their careers – interaction among diverse peoples, featuring images of cowboys, soldiers, explorers and Indigenous Americans.

“Legacy,” the exhibition opening at the Sid Richardson Museum on Saturday, June 25, 2016, depicts the clash of cultures of the 19th century American West. The legacy of conflicts among cowboys, soldiers, explorers and Indigenous Americans during westward expansion continues to impact America today. The exhibition also celebrates Sid W. Richardson’s legacy of philanthropy and collecting art. Admission is free to the museum, which is open daily, except for major holidays, in Sundance Square in downtown Fort Worth.

The legacy of the patronage of Sid W. Richardson (1891-1959) began in 1942 when the legendary oilman and philanthropist began collecting art of the American West – its people, its history and its landscape. He amassed one of the most significant private collections of Remington and Russell in the United States. In 1947, he established the Sid W. Richardson Foundation. In 1982, the Foundation’s board of directors established an art museum dedicated to displaying Richardson’s permanent collection and to providing educational art experiences for the public at no charge.

“This exhibition offers a stunning view of a rapidly disappearing Western frontier,” said Mary Burke, director of the museum. “The American West underwent dramatic transformation in the late 19th century in the face of exploration, transcontinental transportation, Indigenous American confinement to reservation land and immigration.

“‘Legacy’ presents themes that occupied Russell, Remington and their contemporaries throughout their careers – interaction among diverse peoples, featuring images of cowboys, soldiers, explorers and Indigenous Americans. The American West intrigued several generations of artists, and it continues to do so even today. The conflicts and cultural encounters that occurred among these people in the 19th century continue to impact life in America and may be some of the most significant legacies of the era of westward expansion.”

Highlights of the Exhibition

The paintings by Russell and Remington’s contemporaries have not been displayed in the museum in several years; four have not been displayed since 2005, “Indians” (“Indian Attack”) (ca.1910), an oil on canvas by Edwin Willard Deming, and three Indigenous American studies in watercolor and gouache on paper, “Ogalalla Sioux,” “Apache,” and “Cheyenne” (all ca. 1930) by Herbert M. Herget.

Also included are paintings of Indigenous Americans by Peter Moran, William Gilbert Gaul and Charles Francis Browne, which were executed in the last two decades of the 19th century when all remaining tribal lands in the United States came under direct control of federal authorities. “Indian Encampment” (ca.1880-1881) by Peter Moran shows Indigenous Americans still armed, rich in horses and living in traditional ways. In “The Pow-Wow” (ca. 1890), William Gilbert Gaul portrays Plains Indian life in transition. “Nai-U-Chi: Chief of the Bow, Zuni 1895" (1895) is Charles Francis Browne’s portrait of an elder brother in one of the most prestigious Zuni Indian societies.

From the museum’s rich holdings of Russell works, “Bringing Up the Trail” and “Returning to Camp”—oil on canvas paintings completed when Russell was 31 and 37, respectively—illustrate one of his favorite themes at the end of the 19th century: Indigenous American women and children on the move, outfitted for travel. They are complemented by Russell’s late career exploration of similar subject matter, “In the Wake of the Buffalo Runners” (1911), on loan from a private collection.

“Legacy” also returns to the galleries one of the oldest Russell paintings collected by Richardson, “Western Scene,” believed to be one of Russell’s first formal commissions, completed when he was 21 years old. Painted with house paint on a pine board, the painting hung above the bar in the saloon owned by his friend, James R. Shelton, in Montana’s Judith Basin. While clearly the work of a developing artist, it depicts themes Russell returned to throughout his career and includes a buffalo skull, which later became his trademark.

The three bronzes on loan from a private collection complement the paintings from the Richardson’s permanent collection, illustrating Remington and Russell’s mastery of similar subject matter in both oil on canvas and bronze. Striking in its scale, Remington’s “Dragoons 1850” (cast # 5, 1917), like “Rounded Up” (1901), captures a dramatic moment of military confrontation. Remington’s “The Norther” (unnumbered cast 1900) and 1909 nocturne, “The Luckless Hunter,” depict man and horse battling a brutal winter storm. Russell’s “Buffalo Hunt” (modeled 1905) and “Indians Hunting Buffalo” (1894) illustrate his vitality of motion in depicting another of his favorite themes, the buffalo hunt.

In the Wake of the Buffalo Runners, Charles M. Russell, 1911, Oil on canvas, Private Collection