The 6th Annual Art of Brooklyn Film Fest will open its 2016 edition with the Bklyn Premiere of the full theatrical version of Spike Lee's new Black Lives Matter doc '2 Fists Up: We Gon Be Alright.' The film will screen Wed., June 8 at 7PM in Founders Hall Theater, 180 Remsen St, Brooklyn Heights. 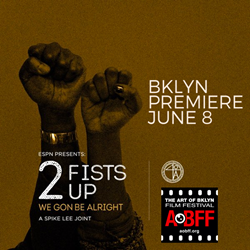 Spike Lee's 2 FISTS UP WE GON' BE ALRIGHT

"We are ecstatic to be showing the work of a Brooklyn indie film icon, especially since his values correspond so closely with our mission. Like Spike Lee, we are for, by and about Brooklyn—all of it." Joseph Shahadi, Exec Director AoBFF.

The Art of Brooklyn Film Festival (June 4-12) is honored to open our 6th Annual AoBFF with the Brooklyn premiere of Spike Lee's new documentary 2 Fists Up: We Gon Be Alright on June 8th at 7pm at St. Francis College's Founders Hall Theater (180 Remsen St, Brooklyn, NY 11201) A shortened version of the film was shown at Tribeca but the AoBFF screening is the first time the full film will be shown for a festival audience.

2 Fists Up is about the Concerned Student 1950 movement at the University of Missouri, whose efforts led to the resignation of former UM System President Tim Wolfe over racial issues on campus. Capturing a semester of unrest at Mizzou, 2 Fists Up touches on the essential participation of the football team in supporting the student movement. Former Tigers coach Gary Pinkel tweeted a photo of the entire team locking arms in solidarity with hunger striking activist Jonathan Butler, who was calling for Wolfe's resignation. Pinkel said, "I support my players, and a young man's life was on the line. I'm talking guys had tears in their eyes, crying, and asked if I could support them and I said I would ... I didn't look at consequences. That wasn't about it at the time. It was about helping my players and supporting my players when they needed me." Butler is more succinct in his assessment, saying, "I guarantee I wouldn't be alive if the football players didn't step in."

Lee made the documentary in partnership with ESPN Films, as part of a deal to make a series of shorts called "Spike Lee's Lil' Joints." A 22-minute version premiered on ESPN's digital platforms on May 31. A 30-minute version screened at the Tribeca Film Festival last month and Lee has also shared the film with student audiences at Mizzou, Spellman and Yale. But AoBFF will open its sixth annual film festival with the full theatrical version.

"We are ecstatic to be showing the work of a Brooklyn indie film icon, especially since his values correspond so closely with our mission. Like Spike Lee, we are for, by and about Brooklyn—all of it." - Joseph Shahadi, Exec Director AoBFF.

AoBFF also has a full slate of new films created in and catalyzed by the Brooklyn independent scene. Standouts for 2016 include World Premieres of the horror feature ‘Seclusion’ directed by Joe Bandelli and sci-fi thriller ‘Diverge’ directed by James Morrison. Brooklyn's own Mr. Kaves (Lordz of Brooklyn, Brooklyn Made Tattoo) is featured in the French drama ‘Star’ which will have its US Premiere at AoBFF. Star is directed by Marc Aurèle Vecchione.

Documentaries of note include ‘The F Word’ about 5th wave feminist performance art, and In Our Backyard’ which exposes the epidemic of sex trafficking in Brooklyn.The festival will also be screening blocks of short comedies, dramas, docs and animation and its famous ‘Film As Art’ block, which is a home for experimental art films that are often passed over by film festivals.

AoBFF will host panel discussions on important topics facing filmmakers: Women in Entertainment: ‘Power Players Changing the Parity Game’ produced with NY Women in Film and Television, ‘In the Mix: Latino Filmmakers at the Forefront’ produced with Prime Latino Media and ‘How To: Microbudget Filmmaking in NYC’ with guests from the NY Mayor’s Office of Film, Theater and Broadcasting.

On Saturday, June 4, AoBFF is partnering with the NYC Parks Dept to produce a free event: ‘Best of the AoBFF’ on the main lawn in Sunset Park. Brooklyn’s DJ SugarfreeK will be spinning and previous festival films will be screening when the sun goes down. The event will have an old-school Brooklyn block party vibe with food, fun and a block of free films headlined by 80s-style horror romp ‘Lake Nowhere.’

Attendees can purchase an All-Access Festival Pass (every party, event and screening) for only $40 til May 27, $50 thereafter. Pre-Sale tickets are $2 off online when customers use code AoBFF16

The Art of Brooklyn Film Festival is the only international, independent festival in the world exclusively devoted to the Brooklyn indie film scene. We consciously work against the ways that film festivals in the borough support gentrification, by screening in neighborhoods across Brooklyn, including those underserved by cultural institutions. We are ecstatic to be showing the work of a Brooklyn indie film icon, especially since his values correspond so closely with our mission. Like Spike Lee, we are for, by and about Brooklyn - all of it.

And it's working: the director Elliot Lester (Nightingale) has called us "Brooklyn's Tribeca."

Please see our site for more information about the schedule of this year's films and to read our international press at http://www.aobff.org.