Steamy thriller offers Angelenos an exclusive opportunity to view Nick Jonas’ latest movie prior to its U.S. theatrical and on demand release while supporting a worthy cause. 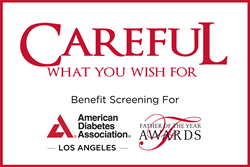 Careful What You Wish For starring Nick Jonas

The American Diabetes Association Los Angeles announced a special advance screening prior to its U.S. release of “Careful What You Wish For” on Monday, June 6, 2016 from 7:30 to 9:30 p.m. at the Landmark's Regent Theatre in Westwood located at 1045 Broxton Avenue (between Weyburn and Kinross), Los Angeles, CA 90024. The film stars Nick Jonas, Isabel Lucas, Paul Sorvino, Kandyse McClure, Graham Rogers and Dermot Mulroney, and is directed by Elizabeth Allen Rosenbaum.

“Careful What You Wish For” opens In Theaters and On Demand Friday, June 10, 2016. The advance screening benefits the Association’s Father of the Year Awards to be held on Friday, June 17, 2016 at the Beverly Hilton, 9876 Wilshire Blvd, Beverly Hills, CA 90210.

“I couldn’t be happier that we were able to make our film “Careful What You Wish For” available for this special screening to help promote and support the American Diabetes Association’s Father of the Year Awards [ADA/FOTY],” commented Michael Helfant, one of the producers of the film and past Father of the Year honoree. “I became involved with this organization after working with Nick [Jonas] on the film. Nick’s father Kevin is also a past FOTY honoree, as is one of our other actors in the film, the always outstanding Paul Sorvino, and Dr. Kevin Kaiserman, one of the co-chairs of the ADA/FOTY dinner next month and my daughter Arianna’s pediatric endocrinologist for many years. Talk about synchronicity. We’ve come full circle and the spotlight is on the ADA Father of the Year Awards. This special screening and the FOTY dinner next month will both be great events supporting the Association.”

Set in a wealthy vacation community, “Careful What You Wish For” is a story of seduction, deceit and betrayal. The summer before he leaves for college a young man (Jonas) begins an affair with the beautiful wife (Lucas) of his powerful investment banker neighbor (Mulroney). The plot thickens when a suspicious death embroils the young lovers in scandal. The Motion Picture Rating for the film is rated R for some sexual content/nudity and adult themes. All guests must be 17 years or older, or be accompanied by a parent or adult guardian.

General admission tickets for the screening are $50 with proceeds benefiting the American Diabetes Association/Father of the Year Division. A limited number of VIP reserved seating and cocktail reception tickets are available for $100. For VIP ticket holders, the reception begins at 6 p.m. at the Palomino Westwood Village located at 10877 Wilshire Blvd, Suite 150, Los Angeles, CA 90024. Bella Los Angeles Magazine is a media sponsor for the pre-screening event. Tickets available at http://www.diabetes.org/carefulwhatyouwishfor

ABOUT THE FATHER OF THE YEAR AWARDS, LOS ANGELES
Presented by the Los Angeles Father’s Day Council, The Father of the Year Awards dinner is hosted in collaboration with the American Diabetes Association and the Los Angeles Father’s Day Council, which is comprised of volunteer community leaders who strive to heighten the meaning of fatherhood, while raising funds for philanthropic purposes. This award recognizes men that have made family a priority, while balancing demanding career and community involvement. Awardees are selected because their peers and families recognize them as role model fathers. In addition, honorees help raise much-needed funds to help Stop Diabetes®. http://www.diabetes.org/fotyla

ABOUT THE AMERICAN DIABETES ASSOCIATION
The American Diabetes Association is leading the fight to Stop Diabetes and its deadly consequences and fighting for those affected by diabetes. The Association funds research to prevent, cure and manage diabetes; delivers services to hundreds of communities; provides objective and credible information; and gives voice to those denied their rights because of diabetes. Founded in 1940, our mission is to prevent and cure diabetes and to improve the lives of all people affected by diabetes. For more information please call the American Diabetes Association at 1-800-DIABETES (1-800-342-2383) or visit http://www.diabetes.org Information from both these sources is available in English and Spanish.
# # #