In honor of Men’s Health Month, Vocational Rehabilitation shares a story about how organ donation can save a life. 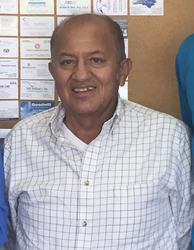 Omar Terceros got a second chance with a kidney transplant

He was motivated, ready for everything, and always prepared. He has a great attitude - always smiling. He’s a very positive individual.

Omar Terceros has a history of taking chances. In 1971, he left his home country of Bolivia and came to the United States in hopes of finding a better life. Though he had no family or job prospects in the U.S., the risk paid off – he settled in New Jersey and found work in the construction industry.

When Omar faced hard times in 2009 after a stroke caused kidney failure that left him in need of a transplant, he once again took a chance. In 2013, he heard about the outstanding transplant program at Tampa General Hospital, so he packed up his car and drove down the east coast in hopes that he would qualify.

Once he arrived in Tampa, Omar began to look for work. Since his health left him unable to work in construction as, he reached out to Vocational Rehabilitation (VR), a state agency that helps people with disabilities get jobs, to find a new career path. His VR Counselor, Dorjan Kraja, did some research to find suitable jobs and suggested that Omar enter training to become a security guard.

VR paid for Omar’s classes and covered the cost of applying for his license, and then provided a job coach who worked with Omar to help him find employment after he completed his training. In March 2015, he began working as a security guard at McRoberts Protection Agency in Tampa.

Omar was grateful for the chance to have a second career. “It’s a good job,” he says. “I’ve always enjoyed it.” Along with the chance to earn a paycheck, the job also helped Omar establish himself in Tampa so he could receive a transplant through the hospital. He worked and waited for a call letting him know that a matching donor had been located - a call that would change his life.

That call came on April 28, 2015, when Omar rushed to the hospital to become the grateful recipient of a kidney donation. Though the surgery left him unable to work for several weeks, Omar’s employer was happy to accommodate him. “Because of his previous exemplary employment at the company, his employer reserved his place and put him on medical leave throughout his recovery,” says Dorjan. Omar appreciated his employer’s kindness, but his work ethic wouldn’t allow him to stay away for long. After successfully healing from the surgery, he returned to work in July.

Dorjan is proud to see how far Omar has come, and credits his positive outlook for his continued success. “He is a terrific guy,” he says. “He was motivated, ready for everything, and always prepared. He has a great attitude -- always smiling, and was always aware that when something bad happened, he had the power to change it. He’s a very positive individual.”

That positivity is rooted in a sense of realism. When looking ahead to the future, Omar admits his biggest goal is to simply maintain his health. For the next few years, he must stay in the Tampa area so the hospital may monitor his healing process – but after the time is up, he has big plans. “I like to travel,” he says. “I want to go on a cruise as soon as my kidney is well.” Between vacations, though, he wants to return to his life and job in Tampa – “I still want to work,” he adds.

For now, Omar is grateful for the chance to work and for the people that helped him move into his second career. “Everyone at the VR office was great,” he says. “If anybody wants to go to VR, don’t think twice. It’s the right place to go.”