A trio led by Elchin Shirinov – master of percussive pianistic pyrotechnics – has delivered a barnstorming set at one of the highest profile Parisian jazz festivals. His participation was supported by the French office of The European Azerbaijan Society (TEAS). 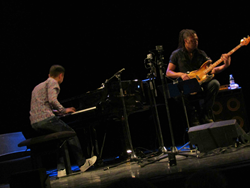 Elchin has a really good sense of how to orchestrate for the trio setting. In particular, he finds a distinct place for the piano and the bass in the music – he doesn’t play any extraneous stuff that the bass is already doing.

Internationally acclaimed Azerbaijani pianist Elchin Shirinov brought his unique approach to ethno-jazz to the Festival Jazz à Saint-Germain-des-Prés Paris – one of the leading European jazz festivals – on 27 May. His trio performed in front of over 200 Parisian music aficionados, critics and H.E. Elchin Amirbayov, Azerbaijani Ambassador to France. The French office of The European Azerbaijan Society (TEAS) sponsored the involvement of the trio, which came in the wake of the participation by Azerbaijani artists in two previous editions of the festival.

Frédéric Charbaut, Jazz Broadcaster and Co-founder of the Festival, opened the evening saying: “This is the third successive year that I have the pleasure to announce a band led by an Azerbaijani musician. In previous editions of the festival, the support of TEAS has enabled audiences to hear some excellent bands led by Azerbaijani musicians, the first of which was the Isfar Sarabski Trio. The leader has now become internationally famous. Last year we saw the participation of Emil Afrasiyab and his Quartet. I am now fortunate to introduce Elchin Shirinov, a new pianist for the festival.”

Shirinov – who comes from the Azerbaijani folk tradition – belongs to the new generation of Azerbaijani jazz musicians who combine elements of post-bop jazz, blues and funk with the modes, melodies and microtones of Azerbaijani folk and classical music. Although fundamentally different to jazz, mugham – the national music of Azerbaijan – is notable for a high level of improvisation. Throughout, Shirinov’s mellifluous extemporisations and pianistic pyrotechnics entranced the jazz cognoscenti in the crowd, particularly in his variations around the folksong Gul Achdi. He went on to give a very individual interpretation of two of the most popular Azerbaijani folksongs Sari Gelin and Durna; and included his reflective self-penned compositions Waiting and Muse in his set, many of which featured the sound of the Melodica, a wind-operated keyboard that makes an accordion-like sound, which he balanced on top of the grand piano.

Shirinov has formerly played with Rain Sultanov, who remains one of the foremost Azerbaijani tenor saxophonists, and has also performed alongside many of the visiting international jazz musicians participating in the annual Baku International Jazz Festival. This multifarious experience has stood him good stead, and the evening saw him team up with Linley Marthe, who previously played with fusion pioneer and Weather Report group founder Joe Zawinul, and the inspired American drummer Eric Harland, who has played with the free jazz figurehead Charles Lloyd.

The rapturous response bore testament to American pianist Brad Mehldau’s testimonial: “Elchin has a really good sense of how to orchestrate for the trio setting. In particular, he finds a distinct place for the piano and the bass in the music ¬– he doesn’t play any extraneous stuff that the bass is already doing.” Harland’s polyrhythmic drumming technique clearly excited the audience, and he reveled in the chance to play in different meters due to the variable and unusual time signatures in Azerbaijani music. The interplay between the men was most intuitive and Harland demonstrated great sensitivity, unleashing his musical power whenever relevant.

The set by the Elchin Shirinov Trio was followed by a fusion set by leading French clarinetist Michel Portal, American drummer Jeff Ballard and American bass exponent Kevin Hays, who has given Shirinov tuition and guidance over the past few years. This combined free and fusion jazz and classical nuances to hypnotic effect.

The Elchin Shirinov Trio also performed a successful concert on 26 May in Reims at the local Sunnyside Festival.

Go to http://www.elchinshirinov.com to experience the innovative work of Elchin Shirinov.