Azerbaijani culture, business and jazz have been placed firmly in the focus of French entrepreneurs and jazz fans in Reims – a 45-minute TGV ride from Paris. The event was organised by the French office of The European Azerbaijan Society (TEAS), in partnership with Jazzus Productions, CCI International Champagne-Ardenne and the Azerbaijani Embassy to France. 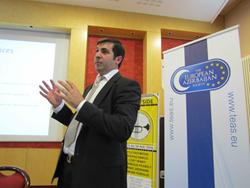 Sarkhan Alakbarov, Representative of the Confederation of Entrepreneurs of the Azerbaijani Republic (ASK)

This presentation before over 30 local industry kingpins gave an invaluable overview of the economic fabric of the country.

The French city of Reims, located 143km from Paris, hosted an event featuring an enthralling mix of Azerbaijani business, culture and music on 26 May. This was hosted by the CCI Reims-Eperney, and organised by the French office of The European Azerbaijan Society (TEAS), in partnership with Jazzus Productions, CCI International Champagne-Ardenne and the Azerbaijani Embassy to France. This was also a celebration of Azerbaijani Republic Day – remembering the achievements of the Azerbaijan Democratic Republic (ADR), the first democracy in the Muslim East – which existed from 1918–20.

The afternoon began with a roundtable focusing on how cultural co-operation can create economic opportunities as a vehicle for increasing understanding of the country, its tolerance, and westward-facing stance, attended by over 30 company representatives of Reims and its region. Marie-Laetitia Gourdin, Director, TEAS France, explained how the meeting came in the wake of events held in Reims in 2012 when it hosted the now-famous Azerbaijan – Pearl of the Caucasus exhibition, opened by Mrs Mehriban Aliyeva, First Lady of Azerbaijan. Last year, TEAS decided to support the creation of a new jazz festival in the city, known as the Sunnyside Festival, founded by Jazzus Productions. It facilitated the participation of Azerbaijani jazz pianist Emil Afrasiyab and his Quartet. The enthusiasm generated by this collaboration provided the groundwork to add cultural and business roundtables to the proceedings.

Mrs Gourdin explained how Azerbaijan is a close partner to the EU, and that the country is officially secular, combining the oriental and European. She outlined how TEAS is contributing towards developing links between French and Azerbaijani cities, mentioning examples from Colmar and Mulhouse, where TEAS organised its Azerbaijan Through the Lens exhibition and participated in the Christmas Market, which showcased typical Azerbaijani products for French consumers.

Composer Pierre Thilloy spoke of his experiences in Azerbaijan since he began visiting the country regularly as Composer-in-Residence for the French Embassy in Azerbaijan in 2001. He explained how music remains integral to every element of Azerbaijani life and is a key to comprehending the country. Mr Thilloy referred to the great 20th century symphonic tradition of such Azerbaijani composers as Gara Garayev and Fikret Amirov, and how music can be harnessed to speak of difficult or challenging subjects.

His sentiments were reflected by Jean Delestrade, Co-Founder of Jazzus Productions, organiser of the Sunnyside Jazz Festival. Looking forward to the concert by the Elchin Shirinov Trio that evening, he commented how the three participations of Azerbaijani jazz musicians in the Festival Jazz à Saint-Germain-des-Prés Paris – organised by TEAS France – and this second participation in the Sunnyside festival were placing Azerbaijan on the map for jazz fans. The Paris festival has previously featured the now-famous Isfar Sarabski and Emil Afrasiyab and will now also place Elchin Shirinov in the spotlight. He commented that those musicians from France and other countries who were collaborating with Azerbaijani jazz artistes are now beginning to understand the country through its music.

Ayaz Gojayev, Cultural Counsellor and First Secretary, Azerbaijani Embassy to France, spoke of the cultural work undertaken by the Heydar Aliyev Foundation in France, such as the restoration of five 14th century stained glass windows in Strasbourg Cathedral; contributing to the restoration of several rural churches in the Basse-Normandie region; and playing an integral role in creating the Islamic art department in the Louvre Museum. He discussed the importance of establishing friendship and co-operation charters between French regions and towns and those in Azerbaijan. Since 2011, 11 such charters have been signed, and there is a high level of decentralised co-operation between France and Azerbaijan in business and cultural terms. An agreement on academic exchange has also been signed between Ganja University and Reims University, and it is hoped that today’s meetings will prompt new areas of collaboration between Reims and Azerbaijan.

A second roundtable concentrating on economic opportunities in the Azerbaijani non-oil sector followed. The Azerbaijani government is currently seeking to diversify the economy away from over-reliance on hydrocarbons and is seeking collaboration with French businesses. This presentation before over 30 local industry kingpins gave an invaluable overview of the economic fabric of the country; its business climate; investment opportunities; and presentations covering a range of sectors, including viticulture; agribusiness; tourism; and pharmaceutical manufacture.

Mrs Gourdin began by outlining the strengths of the Azerbaijani economy, but also the challenges that it currently faces in seeking to achieve diversification. She explained that the country is open to French investment, joint ventures and the application of French industrial specialist knowledge, and that such developments as the Baku International Seaport and the launch of Special Economic Zones (SEZs) are aimed at kickstarting the non-oil economy.

Lawyer James Hogan, Partner at Dentons, which supported the event, gave an insight into the judicial and business environment in Azerbaijan, including its political stability, the emergent middle-class, the respect for the inviolability of contracts and the genuine will to diversify the economy. He explained some of the agreements that have been ratified by France and Azerbaijan, aimed at eliminating double-taxation and fiscal fraud, and the legislation that has been passed to attract and protect the interests of foreign investors. The tax and customs dispensations and simplifications of SEZs were also outlined, as was the concept of the ‘single window’ for business registration that facilitates completion in less than five working days.

Sarkhan Alakbarov, Representative of the Confederation of Entrepreneurs of the Azerbaijani Republic (ASK), who was recently nominated as official representative of ASK in France, explained how ASK provides a platform for Azerbaijani entrepreneurs to enter the French market and vice-versa, providing legal counsel and match-making opportunities.

Finally, Claude Humbert, Director of Industry, Innovation, International Relations and Durable Development, CCI International Champagne-Ardenne, outlined the industries of the region, many of which mirror those currently being developed in Azerbaijan, indicating where there is scope for future collaboration, especially in the agricultural sector, the region being the primary producer of cereals in France.

The evening culminated with a jazz concert by the Elchin Shirinov Trio as part of the annual Sunnyside Jazz Festival before around 120 ecstatic fans. Pianist Shirinov combines elements of post-bop jazz, blues and funk with the modes, melodies and microtones of Azerbaijani mugham and classical music. Throughout, Shirinov’s pianistic pyrotechnics entranced the jazz cognoscenti, particularly in his variations around the Waltz from Gara Garayev’s ballet The Seven Beauties – one of the most best-known Azerbaijani classical pieces; Sari Gelin and Durna, two of the most popular Azerbaijani folksongs; and his reflective self-penned compositions Waiting, Missing and Muse, many of which featured the sound of the Melodica, a wind-operated keyboard, which he balanced on top of the grand piano.

The evening saw him team up with Muraitian electric bassist Linley Marthe, who previously played with fusion pioneer and Weather Report group founder Joe Zawinul; and American drummer Eric Harland, who has played with the free jazz figurehead Charles Lloyd. The Elchin Shirinov Trio will play again on 27 May in Paris, as part of the renowned Festival Jazz à Saint-Germain-des-Prés Paris, with the support of TEAS.

Go to http://www.elchinshirinov.com to experience the innovative work of Elchin Shirinov.