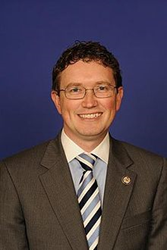 "We are honored to host a visit from Congressman Massie, his support in DC, for our industry, has been paramount." Tom Flottman, President Flottman Company

Tom Flottman, President of Flottman Company has met with Congressman Massie multiple times in Washington D.C.; however this will be Congressman Massie’s first visit to the Flottman facility. Congressman Massie will receive a guided tour of the production floor, an introduction to the management team and has offered to hold a roundtable Q&A with the employees. In addition to Flottman Company employees the Q&A will include honored guests: Paul Meier, Mayor of the City of Crestview Hills, Tim Williams, City Administrator for Crestview Hills and a faculty representative of Thomas More College in lieu of President David A. Armstrong.

Additional information about Flottman Company can be found at: http://www.FlottmanCo.com

Additional information about Congressman Massie can be found at: http://www.Massie.House.gov

U.S. Representative Thomas Massie: http://www.Massie.House.gov - Entered Congress in November 2012 after serving as Lewis County Judge Executive. Massie represents Kentucky’s 4th Congressional District which stretches across Northern Kentucky and 280 miles of the Ohio River. In Congress, Massie serves on three committees: the House Committee on Transportation & Infrastructure, the Committee on Oversight and Government Reform, and the Committee on Science, Space, and Technology.