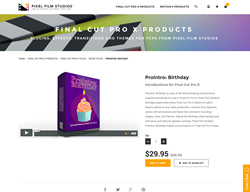 ProIntro Birthday features intuitive controls that allow users to adjust the essential elements of each unique preset. Editors can determine the scale, opacity and width of title elements with the drag of a mouse. With on-screen controls FCPX users can manipulate the overall position, rotation and scale of presets with absolute ease.

ProIntro presets feature a unique intro and outro animation to assist users in expediting the editing process. Using ProIntro is easy, just drag and drop. Browse the ProIntro Birthday library and drag the desired preset above a picture or video in the Final Cut Pro X timeline. Adjust the duration of the title preset and tweak the parameters provided in the inspector window. ProIntro Birthday will do the rest.