The Benbow Historic Inn on the Redwood Highway 101 in Garberville, California, is undergoing construction for major renovations. The Inn is a member of the Historic Hotels of America and is on the National Register of Historic Places. 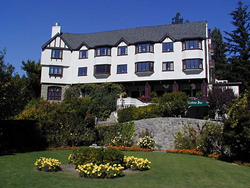 We are so proud to be completing what the Benbow family started in 1924. We have been trying to build this wing for a long time, and we expect all interior and exterior elements of the expansion to have the same historical feel of the original design.

Work has begun on the 90-year-old Benbow Historic Inn located in Southern Humboldt County, two miles south of Garberville. As part of an ongoing $10,000,000 renovation the addition will include a three-story east wing, elevator, two meeting rooms, a new lobby and entrance, updated lounge, and ten new guest suites. The main kitchen will also be renovated, with a new catering kitchen and private wine room dining area added. An Event Center with a capacity for 150 guests will open across the street from the Inn.

“We are so proud to be completing what the Benbow family started in 1924,” said Managing Partner John Porter. “We have been trying to build this wing for a long time. U.S. Bank has helped us immensely in finally making this a reality.” Porter stated,” We are especially pleased that that the Hotel will now be more accessible to all our guests and we will be complying with the ADA laws.”

The Hotel Benbow (as it was originally called) opened in July of 1926 with a limited amount of rooms. The Benbow family continued to build more rooms over the next few years. When the Crash of 1929 changed fortunes a planned East Wing was never constructed. “Several owners over the years talked about completing the Inn,” mentioned Jack Macdonald, Principal. “We really feel proud that we can do this in the hotel’s 90th year of operation.” Macdonald along with John & Teresa Porter purchased the Inn in 1994 with the idea of keeping the historical aspects of the property intact. “We expect all interior and exterior elements of the expansion to have the same historical feel of the original design,” mentioned Macdonald.

The English Tudor-style structure was designed by famed architect Albert Farr with assistance from Helen and Eva Benbow. All nine Benbow brothers and sisters helped with the construction and day-to-day operations. The family sold the hotel in 1952, had to retake control then sold it again in 1962. Patsy and Chuck Watts owned the Hotel from 1978-1993 during which time they renovated the Inn, saw it placed on the National Register of Historic Place, and achieved 4-Diamond ratings. “We have continued to improve the Inn for the 22 years we have been here,” said Porter, “and now we can complete the Inn as accurately and historically as possible. Our goal is to make the Benbow renovation look as though it has always been this way.”

The Benbow Inn will remain open during construction. Completion is expected by 5/2017. For more information go to http://www.benbowinn.com.