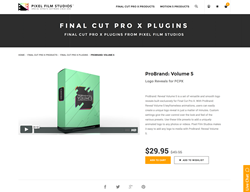 "With a wide variety of intuitive logo reveals and complete customization this plugin is great for showcasing your logos," said Christina Austin - CEO of Pixel Film Studios.

ProBrand Reveal comes packaged with 60 unique animations. Each one of these animations bring in its own personality. Users can modify different settings such as shadows and background color to create a different feel. Choose from presets that animate in very creative reveals. Each preset is different in its own way and can enhance any media on FCPX.

ProBrand Reveal Volume 5 makes customizing easy for users. Various sliders and color wheels are located in the inspector window. These controls allow users to modify certain aspects of the presets such as the shadow and the background color. The included on screen control allows for easy placement and scaling.

The animations used in ProBrand Reveal Volume 5 are built with the user in mind. Each animation has no keyframes which means no tedious fiddling around for the user. Simply drag and drop the chosen preset onto media or onto a blank spot on the timeline. Customize the animation using the onscreen controls and inspector controls. ProBrand: Reveal takes care of the rest.

ProBrand Logo Reveal Volume 5 gives the user a wealth of presets to choose from. This allows for different variations of animation for the same logo. Users can further their ability to customize the presets with various controls and options. This gives every variation of a logo a distinct feel while still keeping the same style.