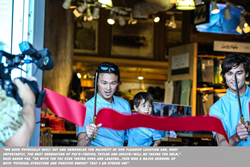 Amidst a standing room only crowd of surf industry royalty, city royalty, family, friends and past and present employees, Huntington Surf & Sport celebrated its Grand Opening on Wednesday, May 25 at the corner of PCH and Main Streets in Surf City USA.

Special guest speakers included Hurley founder, Bob Hurley, legendary Huntington Beach High School surf team coach, Andy Vendone, and the first employee that Aaron Pai hired after purchasing HSS in 1979, Greg Osthus. Hurley spoke at length about how HSS has captured the essence of the sport and acts as a “curator” for all generations of surfers. He also confirmed that HSS was the first dealer for Hurley-branded surfboards, with Aaron Pai fronting him $2,400 for eight surfboards in 1979; giving him free creative reign.

Verdone discussed the many surf trips that he and Aaron have taken to the world’s most exotic locations, and how HSS has cultivated a “family” atmosphere that makes the store welcoming for everyone. Osthus shared several stories (past, present and future) about how Aaron constantly pushes the retail envelope and continues to evolve HSS into the premier specialty retail destination. Greg mentioned how he was the young surf rat wanting a job back then and his 12 year-old son represents the new generation of kids that will be taking over soon.

Aaron Pai opened the ceremony by describing the recently completed renovations to the iconic store which included “blowing out” all of their front-facing walls on Main and PCH streets some 15 feet and adding more than 3000 square feet of retail space. A massive wetsuit room and flagship stores for Vans, Volcom, Hurley and Channel Islands and allows Huntington Surf & Sport to offer the largest inventory and best selection of hardgoods on the West Coast.

“We have physically built out and remodeled the majority of our Main and PCH location and, most importantly, the next generation of Pai’s—Trevor, Taylor and Ashlyn—have taken the helm,” said Aaron Pai. “So with the Pai kids taking over and leading...this was a major remodel of both ‘physical structure and positive energy’ that I am stoked on!”

Aaron also discussed learning to surf at Waikiki and the Huntington Pier, and being taught the true “Aloha Spirit” and importance of family from his Grandma Choi. “Because of HSS I have surfed around the world—Tavarua, South Africa, Australia, the Menatawais—and have had some amazing and unforgettable experiences,” said Aaron. “And I am so happy that Trevor, Taylor and Ashlyn have already started on this incredible journey!”