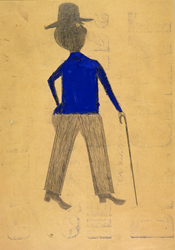 Every one of us continues to benefit from the generosity of hundreds of individuals over the course of the Museum’s 107-year history.

As part of the Newark Museum’s commemoration of Newark’s 350th anniversary, a new exhibition will showcase the stories of four Newarkers who were key benefactors of the Museum: Lida Clanton Broner, Caroline Bamberger Fuld, Howard W. Hayes and W. Clark Symington. Newark Stories: Four Newarkers Who Made a Difference opens on June 18 and runs through January 8, 2017.

“As the City of Newark celebrates its 350th anniversary, all Newarkers — indeed all New Jerseyans—can be proud of the Museum’s vast collections showcasing artistic endeavor from every part of the globe and the community services these collections make possible,” said Steven Kern, the Museum’s Director and CEO.

Each benefactor brought to the Museum different interests and perspectives; and their collections—as well as their ideas—helped shape the institution in the first half of the 20th century.

Lida Clanton Broner was an African-American Newerker who traveled to South Africa in 1938 with savings from a lifetime of work as a hair stylist and housekeeper. The trip was motivated by not only a sense of ancestral heritage but also Broner’s involvement in the Council on African Affairs led by Paul Robeson and W. E. B. Du Bois. During her nine months of travel, she circulated among South Africa’s black intellectual elite and lectured at schools and universities. She also assembled a collection of more than 100 works of beadwork, pottery, mission school crafts and other personal items, carefully noting where she acquired each object and who the makers were. In 1943 the Museum displayed her collection in what was possibly the first exhibition of South African art in an American museum. Broner subsequently donated much of her collection to the Newark Museum, a gift that has recently been augmented with an important archive, including her diary, photo albums and other mementos from her grandsons.

Caroline Bamberger Fuld was the sister of Louis Bamberger and a co-founder of Newark’s famous department store L. Bamberger & Company. She was the wife of Louis Meyer Frank and later Felix Fuld, both partners in the famous store. Fuld served on the Newark Museum’s Board of Trustees from 1929 until her death in 1944. She was a supporter of Jewish charities as well as a patron of the Museum, supporting the institution’s desire to acquire the work of living American artists. In 1924, anticipating the completion of the Museum’s new building that funded by her brother, Fuld donated $10,000 for the purchase of contemporary American works of art. After her husband’s death in 1929, Fuld established a memorial endowment that has funded the acquisition of hundreds of works. Caroline Bamberger Fuld’s support of the Museum’s modern art acquisitions followed the Museum’s founding commitment to the “art of today,” supporting living American artists at a time when most museums in the United States were focused on acquiring European Old Master paintings.

Yale-educated attorney Howard W. Hayes was a litigator, Newark judge and New Jersey Assistant District Attorney in the late 19th century. But it was as a patent lawyer that he attained an international reputation, becoming the personal counsel for Thomas Alva Edison’s massive manufacturing enterprises. Hayes was a passionate art collector and had a particular love of Asian works in porcelain and bronze. By the time of his death at the age of 45 in 1903, Hayes had amassed collection that was given to the City of Newark. Because Hayes died before the Newark Museum was founded, his collection was for many years on deposit at the New Jersey Historical Society in Newark. Hayes’ widow Mary Vanderpoel Hayes Pennington decided that the collection should be transferred to the Newark Museum, where it became a gift in 1949. The gift of the Hayes collection amplified the important holdings of Asian art that began with the museum’s founding in 1909.

W. Clark Symington was a Newark industrialist and a trustee of the Museum during the 1940s and 1950s. A graduate of Yale, with business interests in New England as well as in Newark, Symington traveled extensively and collected objects specifically for the Museum’s growing decorative arts collection. One of Symington’s passions was English silver. Influenced by the Museum’s focus on art in the design and production of everyday objects, Symington paid particular attention to the way silver objects were made, how they expressed the artistic skill of their makers and how they were used in a domestic setting. Symington’s gifts were first displayed in the Museum’s 1953 exhibition An Introduction to Silver, which was the first in a series of projects intended to explain the design, making and use of a wide array of household objects. After his death, Symington’s widow created an acquisition fund in her husband’s memory, which has made possible the purchase of many important additions to the collection over the past 50 years.

“Thanks to people like these four Newarkers, the Museum now has one of the largest art collections in North America and is internationally known for the treasures in its care. Every one of us continues to benefit from the generosity of hundreds of individuals over the course of the Museum’s 107-year history,” said Ulysses Dietz, the Museum’s Chief Curator.

Newark Stories is made possible by a generous grant from the PSEG Foundation, with additional support provided by United Airlines and the Community Gallery Endowment Fund. This exhibition is part of a series of exhibitions at the Newark Museum in honor of Newark's 350 Celebration.