Back to the Roots Expands Financing into $10M Series A

More Funding for Food on a Mission 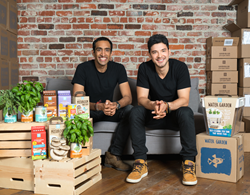 ...with products that bring those values to the plates of young people, Back to the Roots is on track to help transform food for the next generation.

Back to the Roots®, a California company pioneering how families reconnect with food, announced today that it has expanded its January crowdfunding campaign on CircleUp into a $10M Series A. The new investment was led by Acre Venture Partners and also includes funding from S2G Ventures and Red Sea Ventures.

After a milestone year for Back to the Roots — launching 10 new products, expanding into 2,300 schools nationwide, and entering the cereal category — the company has no plans of slowing down. “We are so inspired by the response from our community this year and the opportunity ahead to help families connect the dots between growing and eating food. With our new partners, we will be able to amplify our impact and reach more classrooms, cafeterias, and store shelves,” said Co-Founder, Nikhil Arora.

“We share Back to the Roots founders’ vision to ‘undo food’ and connect families back to where it comes from,” said Gareth Asten, Partner at Acre Venture Partners. “We believe that the future of food relies on transparency, health, and sustainability, and Back to the Roots encompasses all three aspects.”

Sam Kass, previously Senior Policy Advisor for Nutrition Policy at the White House, now of Acre Venture Partners, added, “Back to the Roots’ school education program teaches kids about the food they eat and where it comes from in a hands-on learning environment, which is an essential piece of the puzzle to change how we all think about food. Combined with products that bring those values to the plates of young people, Back to the Roots is on track to help transform food for the next generation.”

This spring also saw Back to the Roots launch five additional products. In its Ready to Grow line, the company introduced three varieties of Garden-in-a-Jar — a windowsill planter in a mason jar format that allows families to watch the roots as they grow. Additionally, the brand launched a first-of-its-kind Organic Self Watering Tomato Planter, offering a low-maintenance solution to indoor tomato gardening using ancient “olla technology.” And finally, on the Ready to Eat side, Back to the Roots extended the popular Organic Stoneground Flakes cereal line to include the new Biodynamic® Cinnamon Clusters — the first Biodynamic cereal to ever hit U.S. shelves.

The additional funding will be used to accelerate product development, scale distribution within the retail and education sectors, and continue growing the Back to the Roots team. “There is nothing more personal than food and what we put into our bodies. Together, with our customers, team, investors, and retail partners, we’re excited to reconnect families back to where it comes from and make a lasting impact on the food system,” said Co-Founder, Alejandro Velez.

ABOUT BACK TO THE ROOTS

Back to the Roots is an organic food company on a mission to Undo Food™ and reconnect families back to where it comes from through fun, innovative, and delicious Ready to Grow and Ready to Eat products. It was founded in 2009 by then college seniors, Alejandro Velez and Nikhil Arora, after they discovered how to grow gourmet mushrooms on recycled coffee grounds. Since then, Back to the Roots has evolved from urban mushroom farming into a thriving business that has received national acclaim and accolades. Back to the Roots currently sells its products in over 14,000 stores worldwide, including Whole Foods Market, Target, Costco, The Home Depot, Nordstrom, Petco, Cost Plus World Market, Loblaw, Giant Eagle, Wegmans, The Fresh Market, Crate & Barrel, Urban Outfitters, Safeway, Kroger, and Amazon. Nikhil and Alejandro have been honored with several awards recognizing their efforts, including BusinessWeek’s “Top 25 Entrepreneurs under 25,” Inc.’s “30 Under 30,” Inc. 500, Forbes’ “30 Under 30,” and CNN’s “10 Next Entrepreneurs to Watch.” In addition, Back to the Roots was named a 2013 Martha Stewart Top Ten American Made honoree and recognized by President Obama as Champions of Change.