Twenty Mayflower Descendants from 15 States will celebrate Flag Day in Pilgrim costume on Capitol Hill in an effort to secure co-sponsors for U.S. Coin Bills H.R. 2980 and S.1715 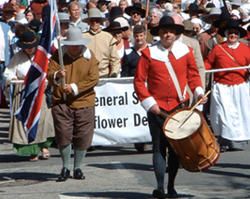 If voted into law," said George Garmany, GSMD 2020 Chair, "all fifty state societies will receive proceeds for educational programs about the Mayflower Pilgrims.

A national effort has been launched by General Society of Mayflower Descendants (GSMD) members in all 50 states to obtain a U.S. Mint coin to commemorate the 400th anniversary of the Pilgrims landing in America. On Flag Day, twenty descendants of the Pilgrims from fifteen states will lobby Congress in period costume.

“The rule for getting a U.S. coin bill passed requires 2/3 of both legislative bodies to sign on as co-sponsors before it can be voted on,” said GSMD Governor General Lea Sinclair Filson. “Our hope is that when our elected officials see Pilgrim descendants dressed in the style of their 1620 ancestors, it will remind them of the importance of keeping this important American story alive.”

The non-partisan bills were introduced in the House by Congressman Bill Foster, Democrat, IL 11th Congressional District and in the Senate by Senior Senator John Hoeven, Republican, SD. No taxpayer money is used for the U.S. Mint Coin program.

“Passing our GSMD Mayflower coin bill has an important purpose,” said George Garmany, Chair of the GSMD 2020 Committee. “If voted into law, all fifty state societies will receive proceeds for educational programs about the Pilgrims. The society will also make donations to both the Wampanoag Tribe and to designated non-profit organizations in the city of Plymouth, MA where the Pilgrims founded their colony.”

The Mayflower Pilgrims wrote a compact before coming ashore that outlined a system of self-governance that later influenced the U.S. Constitution. A rare accomplishment, they maintained a 54-year peace with the neighboring Native Americans. A three-day feast and celebration with the Wampanoag Tribe after the first harvest is the basis of the great American Thanksgiving holiday.

Over ten million Americans are descended from the Mayflower Pilgrims. Since 1897 the General Society of Mayflower Descendants (GSMD) has approved lineage to the Pilgrims for over 90,000 applicants to join its member organization. The society also actively works to educate the public about the Pilgrims and their influence on Western civilization.

Photo and interview opportunities available to press throughout the day.