Two Lives, Many Dances—the Life of Tito and Corinne Valdez Before, During, and After as a Celebrated Dance Couple Revealed in Upcoming Book

Francesca Garcia Pratten chronicles the early family life, career highlights, and personal struggles of Tito and Corinne, revealing their struggles and triumphs as individuals, dance couple, and partners in life in this new book. 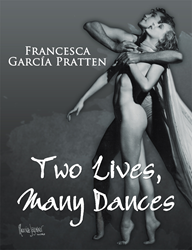 Did you know that there was a news feature with picture showing George White, manager of the Lower Rio Grande Valley exhibit at the fair asking Mlle Corinne to replace her “apple” with a grapefruit? You’ll find that in the book, and find out her answer.

Two Lives, Many Dances by Francesca García Pratten follows the story of the author’s parents, the celebrated dance couple, Tito and Corinne Valdez. From their respective early family life to the sensational rise of their dance career, Tito and Corinne would become a showbiz staple renowned for their individual choreography and the magic that rode on the flashy and exotic when they dance as a pair.

Some readers may remember Mlle Corinne, the “apple dancer” at the Texas Centennial in 1936, who performed with nothing but a G-string and an apple. The book delves into this infamous Dallas show and answers—what ever happened to her?—even as the author tags readers along to witness the early dancing life and career milestones of her parents.

Collecting her late father’s personal memoirs and notes, the author weaves a nostalgic narrative that rides on family stories, anecdotes, backstage whisperings, and her memories as the daughter of the famed couple.

Growing up in disparate cultures, Tito is shown to struggle with his family’s wishes to send him to medical school, while Corinne had to overcome polio. Tito would achieve fame in Paris, as Corinne would make her mark in Dallas, Texas and London. As both separately found success in the European nightclub theater, fate would bring them together in New York City. The book chronicles their success as a celebrity pair in Broadway, Hollywood, and across the U.S., sprinkling the narrative with their passion, artistry, and works.

Among the highlights of the new book:

More tellingly, their personal lives are revealed to resonate with turmoil and discord. Circumstances caused by their physical, emotional, and financial issues led them to choose different partners.

First time author, Francesca García Pratten, is a retired educator, received her doctorate from Oxford (Dayton, TN) in 1987. She moved to Port St Lucie, Florida with her husband Joe when they retired. They raised their four children on a small farm in the rural community of Catskill, NY, away from the hustle and bustle of any large city and only two miles from her family’s farm in Leeds, NY.