After the Tragic Shootings in Orlando, Author Emilyann Girdner Cancelled Book Signing Event and Turns Attention to Writing a Letter in Response to the Sad News and Spreading a Positive Message 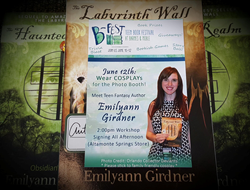 I don't have any idea what exactly our law enforcement or military should do about all of this, but I know what I'm going to do. I'm going to go on loving people every day!

Emilyann Girdner, author of young adult fantasy book, The Labyrinth Wall, cancelled her signing at Barnes & Noble in Altamonte Springs on June 12th, 2016. This cancellation was in response to the shootings that occurred over the weekend in Orlando, Florida. Though the event was cancelled, the store did stay open until closing hours. Girdner encouraged anyone planning to purchase books at the event, to instead redirect those dollars to donations for the loved ones of victims from weekend tragedies. The author did indicate that the event will be rescheduled for another time to be determined at a later date.

Beyond cancelling the signing, the author also issued a personal response (in the letter and in a video) regarding the tragic events happening in Orlando. She had this to say about her public response, "This video was recorded earlier this morning when we knew less about the shooting, all I knew at the time was that twenty people were shot last night in Orlando. Below is my short video response, but being a writer, I wrote a letter about this with more information about the event being postponed and the message of love. It has been difficult deciding to share the statement and even more so the video. But if anyone out there feels one bit more loved from it, it is worth it."

Girdner’s full letter response can be found on her website and is making circles on social media. In her letter, Girdner apologized to readers for cancelling the event. She also made this strong statement, “It is scary to do or say anything right now. But the message I want to spread is so much stronger, so I have to rise above my fear and shout love in the face of this! I don't have any idea what exactly our law enforcement or military should do about all of this, but I know what I'm going to do. I'm going to go on loving all people every day!”

The young adult fantasy author also stated, “Don't let violence and terrorism break us apart, let them make us stronger!” Girdner’s voice is just one among so many mourning and offering support during this hard time. Her complete letter is available at http://www.emilyanngirdner.com.