In the wake of the shooting in Orlando that left 50 dead and 53 injured, the Universal Life Church issued a fiery statement decrying the attacks and urging leaders to take action rather than falling back into apathy. Specifically, the church called for the consideration of gun control policy and for the revocation of protection and benefits for religious and political organizations that espouse dangerous and hateful teachings targeted at specific communities. 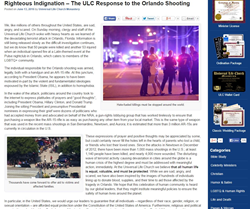 The official statement from the Universal Life Church on the Orlando shooting.

The statement also challenges global leaders [...] to push for meaningful policy change in the wake of the attack rather than simply sharing 'platitudes' on their social media accounts.

The Universal Life Church, one of the world’s largest religious organizations, on Monday released their official statement regarding the shooting at Orlando’s Pulse nightclub.

In the course of the attack, which took place late Saturday night at the predominately LGBTQ+ club, 49 innocent individuals were killed and another 53 wounded. Some of the wounded still remain in critical condition.

While the investigation is ongoing, numerous reports have indicated that in addition to his own homophobia the shooter was motivated by an allegiance to the Islamic State (ISIL) and the fundamentalist Islamic values and anti-American sentiments it espouses.

The official statement, which was published on their website at http://www.themonastery.org, decries the attack as a terroristic devaluation of human life. The statement also challenges global leaders, including U.S. politicians, to push for meaningful policy change in the wake of the attack rather than simply sharing “platitudes” on their social media accounts.

Specifically, the Church highlights the ease-of-access-to and destructive-capacity-of the AR-15 rifle, which was one of the weapons utilized by the shooter. This is the same rifle that was used in the shootings in Newtown, Connecticut and San Bernardino, California. The ULC, in its statement, suggests to world leaders that “serious consideration be given to policies that would limit the amount of damage a singular individual is able to wreak on human livelihood given the advent and availability of ever-more-deadly weaponry.”

The statement also urges leaders to monitor and consider removing benefits and protections from religious and political organizations that are found to espouse dangerous and discriminatory teachings.

The Universal Life Church is advocating for relevant and meaningful policy changes to be made immediately, characterizing the ongoing wave of shootings around the world a “human crisis of the highest degree." The ULC went on to state that its involvement in this matter is relevant to its overarching belief that “we are all children of the same universe” and pursuant to its mission of actualizing a more peace, more equal, and more just world.

The Universal Life Church is a religious organization that is known primarily for its provision of instant online ordination to visitors of its website. Operating since the middle of the last century, the Universal Life Church has claimed to have ordained over 20 million individuals. The Church regularly addresses social justice issues like race and income inequality, religious freedom, and gay rights.

Shield of the Universal Life Church