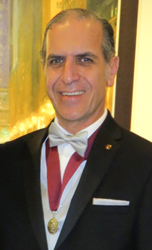 The recognition reflects Alek Zarifian's significant contributions to architecture and society and achievement of a standard of excellence in the profession.

SmithGroupJJR, one of the nation’s leading architecture, engineering and planning firms, is pleased to announce that Alek Zarifian, FAIA, has been elevated to the American Institute of Architects (AIA) College of Fellows.

The recognition reflects his significant contributions to architecture and society and achievement of a standard of excellence in the profession. Zarifian was one of 149 new fellows recognized at an investiture ceremony at the 2016 National AIA Convention and Design Exposition held May 19-21, 2016 in Philadelphia.

In addition to healthcare design, Zarifian has served as lead designer for higher education as well as science and technology projects. He is serving as SmithGroupJJR’s design principal for the Mark and Mary Stevens Neuroimaging and Informatics Institute at the University of Southern California, a 44,000-square-foot renovation and transformation of the former 1950s-era Raulston Memorial Research Building.

Zarifian has 30 years of experience and joined SmithGroupJJR in 2013 after serving in senior design roles at Cannon Design, HDR Architecture and Tammy Edmonds Design, Inc.

Zarifian has been a long-time supporter of the AIA at the chapter level. He served two, 2-year terms on the AIA California Council spanning 2009 to 2014, and was president of the AIA Pasadena & Foothill chapter in 2013. Over the past 15 years, he has served as a visiting critic at numerous architecture schools in southern California, including California State Polytechnic University, the University of Southern California and Woodbury University.

After earning an Associate of Arts degree from Pasadena City College, he proceeded onto the University of Southern California, where he graduated with a Bachelor’s in Architecture and a Master of Architecture degree. He is a licensed architect in the state of California and a LEED accredited professional by the U.S. Green Building Council.

Zarifian is active in his community of Glendale, California, where he has lived since 1978. He served on the Advisory Committee to the City of Glendale’s Community Development Block Grants in 2006 and also later as a member of the Design Review Board, City of Glendale, 2008 – 2012, rising to chairman in 2013. He is a native of Tehran, Iran.

About The American Institute of Architects’ Fellowship Program
AIA’s Fellowship program was developed to elevate architects who have made significant contributions to architecture and society and who have achieved a standard of excellence in the profession. Election to fellowship not only recognizes the achievements of architects as individuals, but also their significant contribution to architecture and society on a national level. AIA’s membership totals over 83,000, with only 3,100 distinguished with the honor of fellowship and honorary fellowship. Founded in 1857, AIA works to create more valuable, healthy, secure and sustainable buildings, neighborhoods and communities. Visit http://www.aia.org.