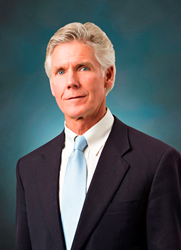 The Nevada Board of Regents has re-elected Rick Trachok, an attorney with Lewis Roca Rothgerber Christie LLP, as chairman of the state’s 13-member higher education governing body. He begins his second one-year term July 1.

Trachok is a partner in the Reno office of Lewis Roca Rothgerber Christie, focusing his practice in the areas of regulatory and gaming law, utility regulation and commercial law.

Additionally, he has served as chair of the Workforce, Research and Economic Development Committee and a member of the Academic and Student Affairs Committee, Cultural Diversity Committee, as well as the ad hoc UNLV President Search Committee.

Trachok was a deputy district attorney with the Washoe County District Attorney's Office before going into private practice in 1981. He has served as a member of the Nevada Board of Bar Examiners since 1991 and as chairman since 2000.

The Nevada System of Higher Education is comprised of two doctoral-granting universities, a state college, four comprehensive community colleges and one environmental research institute, serves the educational and job training needs of Nevada. NSHE provides educational opportunities to nearly 106,300 students and is governed by the Nevada Board of Regents.