An alien spaceship replica "crashed" onto Hollywood Blvd. yesterday as an elaborate publicity stunt to celebrate the release of the 21st century edition of international bestselling novel, "Battlefield Earth" by L. Ron Hubbard. 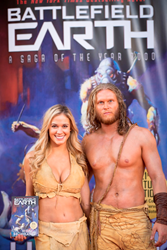 Man is an endangered species.

As part of the June 14th release of the 21st Century book and audiobook editions of "Battlefield Earth: A Saga of the Year 3000" by L. Ron Hubbard, Hollywood Walk Of Fame tourists and event attendees witnessed an alien spaceship replica that appeared to “crash land” onto Hollywood Blvd yesterday amidst an impressive “impact” point that was smoking and smoldering amidst the "impact" ruble.

Jutting a towering 25 feet out of the ground, the lifelike spaceship wreckage was located in front of Galaxy Press, publisher of the 21st century edition of international bestselling novel "Battlefield Earth." An actor in a 9 foot alien costume playing the Sci-Fi novel’s role of the malevolent alien security chief "Terl" from the planet Psychlo—the novel’s chief villain—was extracted and captured by actors playing Jonnie Goodboy Tyler and Chrissie—the novel’s heroes—and a band of 10 Scotsmen replete in blue facepaint and accompanied by a bagpiper and drummer to formally launch the novel’s 2016 release. "Battlefield Earth" is a science fiction epic saga of adventure and courage, wherein man is an endangered species and the future survival of what's left of the human race is at stake.

The event started in front of the world famous Chinese Theatre with Battlefield Earth’s characters of Jonnie, Chrissie and the Scots headed for the crashed hyper-realistic spaceship appearing to have burrowed into the sidewalk in search of Terl, the novel’s villain. The search party arrived to the spaceship crash site where hundreds of onlookers were standing and passing by. Amid considerable smoke rising from the crashed and crumpled “spaceship,” Terl exclaimed “Man is an endangered species,” enacting a line from the Battlefield Earth novel and audiobook and was “forcefully” extracted and captured by Jonnie, Chrissie and the Scots. The Scotsmen, once having Terl secured, began shooting Battlefield Earth T-shirts from their “guns” into the cheering crowd.

Following the “crash” event, guests were invited inside Galaxy Press where Barnes & Noble had set up an off-site bookstore featuring the new book and audiobook.

The characters Jonnie Goodboy Tyler and Chrissie were performed by Aaron Groben and Lauren Compton, respectively. Terl was performed by, well, Terl of course!

The Battlefield Earth "Terl crash" landing event was attended by press and media including KCAL, CBSLA, KTLA, KABC, KSTU, and Telemundo, all of whom ran video segments during their newscasts to highlight the event. Many of these segments can be found on Galaxy Press’ YouTube, Facebook and Twitter channels and by searching the hashtag #TerlCrash on social media.

More information about the 2016 "Battlefield Earth Special Edition" may be found here, along with the offer to read the entire first chapter for free.

Since its initial release in 1982, Battlefield Earth has sold over four million copies and was rated third of the top 100 novels of the 20th Century in the Modern Library Readers Poll. This new edition has 50 new pages containing handwritten author notes made as he was writing the book, along with an interview published in the Rocky Mountain News shortly after the book’s release.

The Battlefield Earth book and audiobook are now available at Amazon, Barnes & Noble, Books-a-Million, Kobo, and wherever books are sold.

For more information, go to http://www.galaxypress.com/the-invasion-2016/