More than $23,000 has already been raised with the help of Andrew Smith’s viral video and the efforts of direct salespeople around the globe. 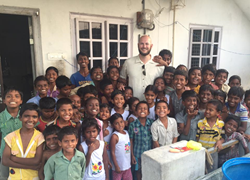 What could be more exciting than throwing a party for one child? Throwing one for 84 orphans in India… on the same day… and then broadcasting it for the world to join in the celebration!

In less than 48 hours, more than $20,000 was raised in support of the children at Azlynn Noelle Children’s Home and the first ever Birthday for the Orphanage event. The campaign’s incredible success can only be attributed to the kindness and compassion of individuals around the globe, who donated after becoming a part of the online movement started by Assistant Director of Azlynn Noelle Children’s Home Andrew Smith.

According to Smith, “The orphan crisis in the world is just a talking point until you see its face. Sex trafficking victims are just a number until you know their names. Giving is just an act until you sit beside the child that your dollar is feeding and watching as he takes the time to pick up every single grain of rice on his plate. Once you get that close, your life is the one that is changed the most.”

With this in mind, Smith went to his audience on Monday, June 6, 2016 sharing his passion and appreciation for the hard working direct sales community. As a united front, this group was able to create an online movement, changing the lives of children at Azlynn Noelle Children’s Home with Smith’s video project that quickly went viral.

“What could be more exciting than throwing a party for one child? Throwing one for 84 orphans in India… on the same day… and then broadcasting it for the world to join in the celebration!” stated Matthew Cretzman, Executive Director of Azlynn Noelle Children’s Home.

Azlynn Noelle Children’s Home is hosting their first ever birthday celebration on Tuesday, July 19, 2016 as a way to remind each of the orphanage’s children that they are known, remembered and loved. A group of eight will be travelling to India for the celebration, bringing gifts, cake and party supplies with them. During their visit, the team will also work to assess specific orphanage needs to decide where funds and assistance are most needed.

The campaign’s original goal of $20,000 has already been met, but with donations still flooding in this goal has been extended to $25,000. Any additional donations above this $15,000 mark will go towards enhancing the general infrastructure of the orphanage.

A ministry of Rooftop Ministries, Inc., the Azlynn Noelle Children’s Home exists to provide a safe, loving haven of rescue for children in third world countries. Located in India, the home hopes to care for as many children as it can and is currently working to purchase land, develop a playground and build new sleeping quarters for the children.